Steve Anderson is best known for his work with Kylie Minogue having been her Musical Director for over 15 years working on every tour and appearance including Showgirl, Aphrodite - Les Folies and The Queen's Diamond Jubilee. He has also worked as Musical Director for Leona Lewis, Little Mix, Westlife and the fabulous burlesque extravaganza The Hurly Burly show in the West End.

Steve began his career at DMC studios as one half of remix/production team Brothers In Rhythm who went on to work on artists including Michael Jackson, David Bowie, Janet Jackson and Sting and Paul McCartney. This led to production for the Pet Shop Boys, Take That (including the No.1’s ‘Never Forget’ and ‘Sure’) and Kylie Minogue’s debut album for deConstruction including ‘Confide In Me’ which he co-wrote and produced.

For Kim Wilde, he made remixes of World in Perfect Harmony and Can't Get Enough (Of Your Love) in 1990. 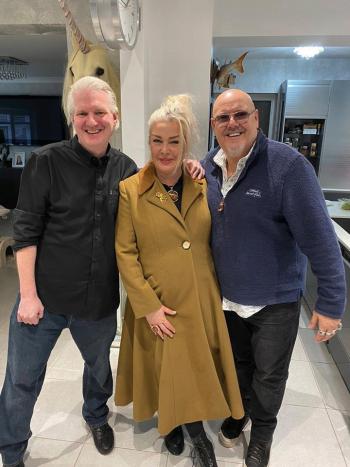 Steve Anderson with Kim and Ricky Wilde in 2020