Born as Stuart Leslie Goddard on November 3, 1954 in London, England. Founder member of the punk group Adam and the Ants in 1977. The group was heavily influenced by the Sex Pistols, and featured SM gear and loud music in their live sets. This group released only one very criticized album called "Dirk wears White sox", before disbanding in January 1980. Adam Ant decided to continue his group with other members, as his three band members formed Bowwowwow.
This new line-up was considerably more successful. Ant reinvented the group and recruited a guitarist and a bassist, plus two drummers. The single "Ant music" was a big hit in the UK and Europe, and subsequent singles "Prince Charming" and "Stand & Deliver" were accompanied by wellmade videos in which Adam Ant starred as a costumed pirate, generating high sales.
In 1982 Adam Ant quit the band and decided to pursue a solo career.
This career was only successful for a short time, with average singles like "Goody Two Shoes" and "Friend or Foe". By the end of 1983 Adam Ant was virtually history.
He still continued making records, like the surprise hit "Room at the Top" in 1990 and its excellent follow-up "Can't Set Rules About Love".
Like Kim, Ant was signed to MCA Records. Kim admitted to her admiration for him on a few occasions...

I was madly in love with Adam Ant of course, like everyone else, in fact I dated him once too... (1)

I had a few nice dates with pop stars during the Eighties, the most memorable being with Adam Ant. We'd worshipped each other from afar but when we finally went out on a date, sparks failed to fly. (2)

You were the sex symbol of the 80s, could choose any man you wanted. Who did you particularly rave about?
There was only one: Adam Ant, lead singer of Adam & the Ants. We knew each other through our videos and we were hot. I sat in hotel rooms in the evenings, thinking of him. Then our managers arranged a date. I'd never been so excited before one dinner. But not for long - we didn't have much to say to one another. The best thing about the evening was actually the chocolate mousse, which Adam gave me. (3) 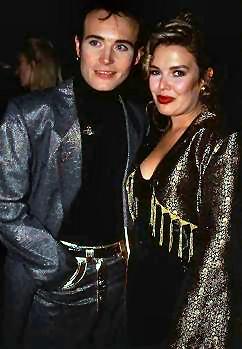