Born as Peredur Wyn ap Gwynedd on April 17, 1975 in Pontypool, Wales (UK). Ap Gwynedd was guitarist with acts such as Natalie Imbruglia, Norman Cook, Sophie Ellis Bextor and Mylène Farmer. In 2006 he joined Pendulum, with whom he had recently worked on their song 'Girl In The Fire'. Peredur was one of the main writers on the song Comprachicos off Pendulum's latest album Immersion. Peredur is currently touring with Tinie Tempah because Pendulum is on a hiatus.

In 2007, he was part of Kim Wilde's band during the Perfect Girl tour in the Spring of 2007. He plays a guitar solo on the track My Wish is Your Command.

On March 2, 2013, Perry got married. During the wedding, Kim sang the song Walk Right Back with his mum. The performance was filmed and put on YouTube by Perry's sister Llinor. 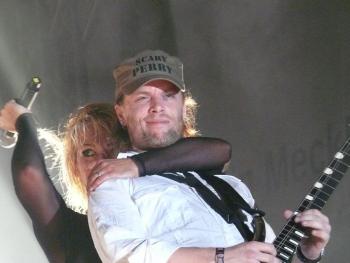