Formed in 1989 by Stephan Groth and Jon Erik Martinsen, Apoptygma Berzerk is a Norwegian band strongly influenced by electronic dance acts such as Kraftwerk, Front 242 and OMD. They recorded their first demo in that year, entitled 'Victims of mutilation'. 500 copies were sold in the Euro electro underground. One of the tracks, 'Ashes to ashes', brought the band to the attention of Tatra records, an underground label. A 12" release was made.

Their first album, released in 1994, was named 'Soli Deo Gloria' and was released to critical acclaim in the underground press. Its follow-up, '7' (1996) was hindered by a forced sabbatical. Stephan had been locked in battle with Norwegian army. As a pacifist, Stephan refused to undertake Norwegian national service in the army, and thus found himself twice in court. In 1996 the military finally relented, and as an alternative to prison for six months, Stephan was allowed to 'serve the country' by doing civilian work. Working for the next 14 months as a mental care assistant, no further musical projects could be undertaken.

After this pause, Apoptygma released a remixed version of 'Mourn' from the album '7' and had considerable success in the German Alternative Chart. US interest increased as well, causing the band to celebrate New Year's Eve 1997 by playing live in Manhattan.
Two more albums, 'Welcome to earth' (2000) and 'Harmonizer' (2002) were released with increasing success the world over.
The fifth Apoptygma Berzerk album 'You and me against the world' (2005) featured a cover of the song Cambodia, which was released as a single in November 2006.

Stephan Groth confesses to being quite the Kim Wilde fan in his younger days: 'Kim Wilde was one of the first girls that I fell in love with. I was twelve or something... I was always a big Kim Wilde fan and I love this 'Cambodia' song most of all'. (Source: Apoptygma Berzerk website) 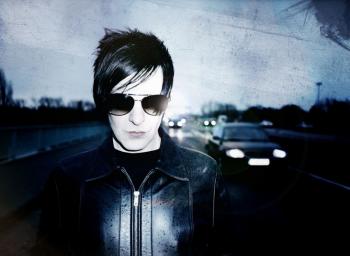