Born February 26, 1972, Jonathan Atkinson is a freelance drummer and programmer based in London.
He has toured with many artists, including Paul Young, Midge Ure, Gloria Gaynor, Belinda Carlisle, Nik Kershaw, The Pointer Sisters, The Three Degrees, Michael Ball, Rick Astley, Kajagoogoo and many others.
His recording credits include several projects for Beatles' producer Sir George Martin (including tracks for Celine Dion and Phil Collins). He has also recorded tracks for BBC's Doctor Who (Album and TV series), Universal artist Hayley Westenra and Andrew Lloyd Webber.
Jonathan has also composed, produced and played on the music for hit Channel 5 TV series Roobarb and Custard Too, and also forthcoming Cartoon Network series Fluffy Gardens.

In 2007, Jonathan played drums for Kim Wilde during her Perfect Girl Tour and on festival dates in the summer. He continued to do so ever since then.

He also plays drums on Kim's 2010 album, Come Out and Play and subsequent albums. 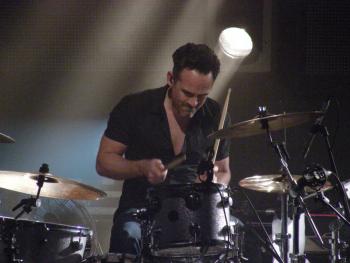