Atomic Kitten was first conceived in 1998 by British musician Andy McCluskey (formerly from OMD). He served as a principal songwriter on Atomic Kitten's studio recordings in the late 1990s and early 2000s. The original lineup featured Liz McClarnon, Kerry Katona, and Heidi Range, but Range quit because of artistic difference and moved on to the Sugababes. She was replaced in Atomic Kitten by Natasha Hamilton. The group's debut single, 'Right Now', was released in November 1999 and reached number 10 on the UK Singles Chart. Their second single, 'See ya' peaked at number 6.

Their debut album 'Right Now' was released in 2000 and initially only made it to number 39 on the UK Albums Chart. Having already released four singles from that album, the record company considered dropping the band, but in the end they released a fifth single, entitled 'Whole Again'. Amazingly, this became a number 1 hit. Subsequently, 'Whole Again' was released globally and reached number 1 in 18 other countries. After Katona left the band because of a pregnancy, she was replaced by former Precious member Jenny Frost. The album 'Right Now' was about to be re-released, and so it was partially re-recorded. This new version of the album reached number 1in the UK albums chart.

Following the success of 'Right Now', a new album, 'Feels So Good' , was recorded. The songwriting and production agreement with Andy McCluskey was an increasing source of tension within the group, and McCluskey departed halfway through the recording of the album. Single releases from the album were 'It's OK' and 'The Tide is High (Get the Feeling)'. In April 2002 Hamilton announced that she was pregnant but opted to continue with the scheduled 2002 tour, before going on maternity leave. The live DVD 'Right Here Right Now', which features the band singing a cover of Kids in America, was recorded at Waterfront Hall in Belfast during this tour.

During January and February 2003, Atomic Kitten toured Southeast Asia, visiting Singapore, Thailand, and Korea. Hamilton, who had given birth to her son Josh on 24 August 2002, brought him on the tour. Before recording their third album, Kool & the Gang approached the group about a collaboration for their album of duets, 'Odyssey'. Kool & the Gang wanted to record an updated version of their hit 'Ladies Night' and were looking for a girl group to sing the lyrics. Atomic Kitten liked the idea and inquired whether they could use it for their next album which was subsequently named 'Ladies Night' as well, in honour of this collaboration. Their first single of the album was 'If You Come to Me'. It peaked at number 3 in the UK singles chart. The album peaked at number 5 in the UK albums chart.

In early 2004, a tour to support the album and the upcoming release of their Greatest Hits album was planned. Shortly before the tour kicked off, the group announced they would be taking an extended break after the completion of the tour. In fact it was Hamilton who prompted the breakup of the band because she felt she couldn't combine being a new mum and touring with a band. The band split up because they didn't want to replace Hamilton.

In October 2012 it was announced that the original line-up of Atomic Kitten (McClarnon, Katona and Hamilton) would reunite for an ITV2 series along with five other pop groups of their time – 911, Honeyz, B*Witched, Five and Liberty X. Frost was not involved because she was expecting twins, whom she gave birth to in January 2013. On 20 November, the girls were spotted leaving a recording studio together. The Daily Mail reported that they were seen filming their reformation for The Big Reunion. When this became a big success, the band decided to continue performing. A UK arena tour in May 2013 followed. In December 2013, Atomic Kitten recorded their first new material in ten years when, along with the other groups from the show, they recorded a Christmas charity single for Text Santa, a cover of Wizzard's "I Wish It Could Be Christmas Everyday". The song peaked at number 13 in the UK.

Although between 2013 and now there have been several announcements of new material, no new tracks have been released. A tour was announced in 2015, celebrating 15 years of Atomic Kitten, but it was cancelled with no announcement as to why. 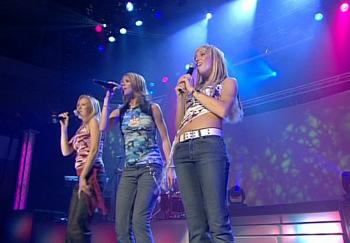 Atomic Kitten performing 'Kids in America' in Belfast in 2002