Band formed in Old Bridge, New Jersey (USA) in 1989. Starting out as a cover band, they performed a mix of Seventies glamrock and punk favourites, they eventually started performing original material as well. The band briefly hit the national spotlight when they won MTV's 'Highway to Fame' contest in 1992. This contest tied into AC/DC's then-current 'Live' album. Unsigned bands were asked to send in cover versions of the AC/DC track 'Highway to Hell' and the AC/DC band members themselves chose Bad Biscut's rendition as the best submission. This led to a deal with the fledgling New Jersey indie label Cathedral Records. Their debut album 'The American Dream?' was released in 1994. The album contained original material as well as a cover version of Kids in America.

The only other release by the band was an EP called 'Cult 45' in 1996. After the band broke up, members Keith Roth and Tommy Tafaro turned up in another Jersey Shore rock band, Frankenstein 3000, which has released several albums between 2005 and now, with Roth acting as frontman and chief songwriter. 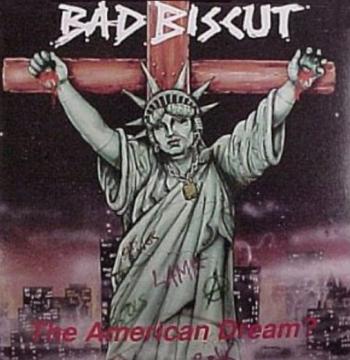