One of 1984's major events was the collaboration of many well-known British acts called Band Aid. They recorded the song 'Do They Know it's Christmas', which became a world-wide big hit, to raise money for starving people in Ethiopia.

Many fans were wondering why Kim was not involved in this particular charity, and she replied: 'I wasn't asked!'. However, Kim has done a lot of other things for charity since then, including 'group' recordings as part of the Anti-Heroin Project and Spirit of the Forest. She also participated in a satyrical re-recording of 'We Are the World' for the Norwegian TV programme Gylne Tider in 2006. 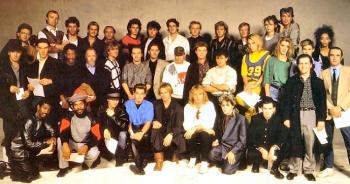