Born in 1959 in Dover (UK), Gary Barnacle is a saxophonist and brass instrument arranger primarily noted for his session work during the 1980s. While he was working with Kim Wilde in the early eighties, he was also her boyfriend. He's played on the following Kim Wilde recordings: 2 6 5 8 0, Action City, Child Come Away, Dancing in the Dark and Love Blonde. Also, he was part of Kim's band during the first tour in 1982.
During his association with Kim Wilde, he also formed the duo Leisure Process with ex-Positive Noise singer Ross Middleton.

His longest association however was with Level 42. He's played on many of their albums. The horn section he formed with British trumpet and fluegelhorn player, John Thirkell, for Level 42 is known as the Henpecked Horns. Barnacle and Thirkell have also backed Swing Out Sister. Barnacle also recorded 'A Way You'll Never Be' with Mark King and Phil Gould. 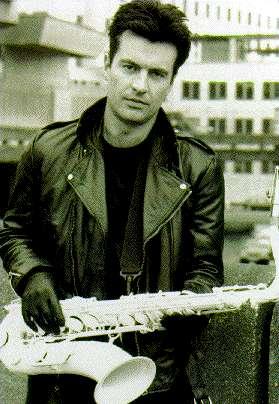