The Japanese band Beat Crusaders (a.k.a. ビート・クルセイダース Bīto Kuruseidāsu), commonly abbreviated BECR, was instigated at the end of 1997 by Tōru Hidaka as an experimental U.S. Lo-Fi Indie Rock unit. The rest of the band later joined as a result of continual experimental gigs performed around the Shimokitazawa (Tokyo) area. Their creative use of analog synthesizers and the old Casitone, incorporated with influences of bands like Weezer and The Rentals, and at times the dynamism of Snuffesque rock, had transformed them into a powerfully melodic guitar band. By the end of 1998, Beat Crusaders had already started creating songs. During all their promotional appearances, their faces are masked by drawings resembling themselves as printed by a dot-matrix printer.
Between 1999 and 2010 they released ten albums and two mini-albums. They also contributed a cover version of Kids in America for a compilation album called 'Class of the 80's Orange'.
In August 2003, three of the four original members of Beat Crusaders left the band, to eventually go on to form the band Anita Chili Peppers. This left behind only Tōru Hidaka who later recruited four new members. It is not known why the original members left.
In 2010, Toru Hidaka confirmed that Beat Crusaders would break-up, but promised to release one more album. Titled 'Rest Crusaders', it was released on 6 October 2010, with 22 tracks of both new songs, old singles like 'Windom', and previously released but recent singles like 'Let It Go' and 'Situation'. 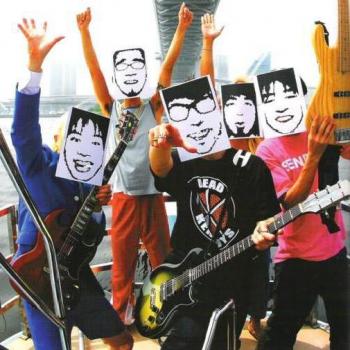