Born December 15, 1961 in Winslow, Buckinghamshire, England. At 17, his mother passed away. Left behind with only his younger sister, he dropped out of art school and started working as a trash collector while simultaneously working in music with his first band. With Steve Askew (guitar), Stuart Neale (keyboards), Jez Strode (drums) and himself on bass, his band released a single, 'Fear Machine' in a private pressing of 1000 copies. A year later, Christopher Hamill, a.k.a. Limahl was asked to join the band, renaming it to Kajagoogoo. They were spotted during a live concert in London, and signed to EMI Records. A series of hits including 'Too Shy' and 'Ooh to be Aah' seems to lead to nothing when Limahl leaves the group within the year over musical disagreements. However, Nick Beggs takes over lead vocals, and the band scores another series of hits with a.o. 'Big Apple' and 'Turn Your Back on Me'.

The band finally dissolves, and Beggs goes on to write material for other artists until he forms Ellis, Beggs and Howard in 1987, with Simon Ellis and Austin Howard. This trio scores a hit with 'Big Bubbles, No Troubles', releases one album and tours alongside a.o. Roachford and T'pau. A second album is recorded, but not released.

Nick goes on writing material with artists such as Gary Numan and Cliff Richard and records material with Steve Howe and Sally Oldfield in the following years, until he joins Phonogram Records in 1993 as an A&R manager. The A&R department is made redundant in 1994, after which Nick works with Alphaville, Belinda Carlisle and the Japanese artist Cozi in the following years.

In 1998, Nick is involved in the recording of Kim Wilde's unreleased album.

He appears live as a member of Kim's band during a concert at Tivoli in Copenhagen, Denmark, on May 16, 2003. After that, he works with Kim regularly, playing bass live on stage during her concerts in festivals and 80's concerts in the UK and Europe. He is also a member of the band during the two legs of the Perfect Girl tour in 2007. He also played a support programme during the second half of the shows in November 2007, when support band Stereoblonde had to quit midway through the tour. He continued to be in Kim's band until 2015, but he also started touring with Steve Wilson.

In 2016, his new band Mute Gods released their debut album, 'Do Nothing Till You Hear From Me', featuring Ricky Wilde on the track 'Father Daughter' (which also features vocals of Nick's daughter Lula). In 2017 the second album from Mute Gods, 'Tardigrades Will Inherit the Earth', follows, and in 2019 the album 'Atheists and Believers'.

Meanwhile, the solo album 'Words Fail Me' is also released in 2019, bringing together an album's worth of new instrumental tracks with two previously released solo albums: 'Stick Insect' (2002) and 'The Maverick Helmsman' (2004). 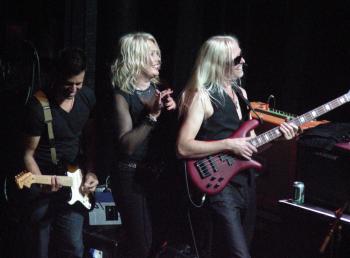