The Belle Stars were an all female British rock band, founded in London in 1980 by former members of the 2 Tone ska revival band, The Bodysnatchers. After the Bodysnatchers broke up, guitarists Stella Barker and Sarah-Jane Owen, saxophonist Miranda Joyce, keyboardist Penny Leyton, and drummer Judy Parsons decided to form a new band, recruiting bass player Lesley Shone and lead vocalist Jennie Matthias (also known as Jenny McKeown). Their first performance was on Christmas Day, 1980, before they had chosen a name. Within a short time, the group became well known around London. Shortly thereafter, they were signed by Stiff Records, then highly successful due to its star act, Madness.

The band's debut single, 'Hiawatha' was released in the late spring of 1981. The band promoted the single by playing support for ska acts The Beat and Madness. However, the single failed to chart. The same production team was responsible for 'Slick Trick', the second single. It also flopped. Keyboard player Penny Leyton left the band late in the year, to be replaced on saxophone and keyboards by Clare Hirst.

When the third single, the radio friendly 'Another Latin Love Song' again failed to break into the charts, the band tried cover versions instead, with some success. 'Iko Iko', a cover of The Dixie Cups' 1965 hit, was The Belle Stars' long awaited UK Singles Chart debut, peaking at number 35 in June of 1982. The Belle Stars repeated this with 'The Clapping Song', a remake of the 1965 Shirley Ellis hit, and then 'Mockingbird', a hit for Inez and Charlie Foxx in 1969 and James Taylor and Carly Simon in 1974.

In January 1983 the Belle Stars released what would be their signature single, 'Sign Of The Times', peaking at number three, and a chart success throughout Europe. It was followed a month later by the band's eponymous debut album, which reached number 15 on the UK albums chart. As with the band's singles, it was a mix of original songs and cover versions.

However, 'Sign Of The Times' proved to be the peak of the band's success. Each follow-up single was less successful than its predecessor: 'Sweet Memory', reached number 22 in the charts in April 1983; 'Indian Summer' number 52 in August; 'The Entertainer' did not chart. It took another year before the band had a minor hit, '80's Romance', which made number 71 in August 1984 before it dropped out after a week. Despite this, the band continued to tour throughout Europe. However, the lack of success took its toll, and McKeown left the band, followed by others, until the band was down to Owen, Joyce, and Shone.

By 1984, Stiff Records was ailing, and it merged with Island Records; in July 1985 it was liquidated and bought by ZTT, the label owned by the husband and wife team of producer Trevor Horn and Jill Sinclair. Under Horn's supervision, the three remaining members recorded a new Belle Stars album with the 4th & Broadway production team in New York City. However, the only tracks to be released were the single 'World Domination', a flop in Britain but a Top 5 Billboard Dancefloor chart hit in the U.S. Following this, the band broke up.

However, in 1989, the Belle Stars finally had a big American chart hit, when 'Iko Iko' reached number 14 on the Billboard Top 100 in March, after it was included on the soundtrack of the film Rain Man, starring Tom Cruise and Dustin Hoffman. The song had been a favourite of Hoffman's. Jennie Matthias toured the U.S. to promote the song.

In 2002 Lesley Shone and Jennie Matthias joined the Here & Now Christmas Party as the Belle Stars to perform three of their biggest hits, 'The Clapping Song', 'Iko Iko' and 'Sign Of The Times', joining Kim Wilde and others. 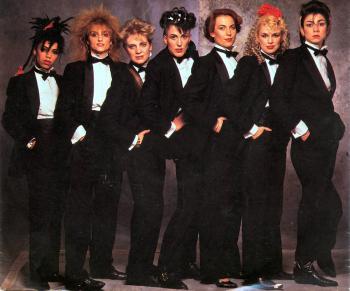