Born November 28, 1947 near Paris, France, Michel Berger learned to play the piano during his chilhood. In 1968, he released his first album "Puzzle". Three years later, Michel Berger met singer Véronique Sanson. He produced her two first albums. He then made a trip in California in 1973. He came back to Paris, wrote the musical Starmania with Luc Plamondon and returned in studios at the end of the 70's as a Pop solo artist with an incredible talent in the soft rock vein. He also worked with Françoise Hardy ('Message Personnel') and France Gall ('Il Jouait du Piano Debout', 'Evidemment', 'Ella, Elle l'a').

In 1980, Michel Berger had his first experience on stage at the Champs-Elysées Theatre in Paris. His show involved 40 musicians. He then performed in two huge Paris concert halls : the Palais des Sports in 1984 and the Zénith in 1986. He directed all France Gall's shows and in 1989, Johnny Hallyday's concert at the Zénith. 1990 was dedicated to his show 'La Légende de Jimmy', which he wrote together with Luc Plamondon again. After writing albums for France Gall and for himself, 'Double Jeu', the first album which was recorded by both Michel Berger and France Gall was due to lead to a concert.

Kim Wilde sang a version of one of his compositions, Première Rencontre in 1987, and in 1990 they met in the French TV programme Champs Elysees, which was broadcast on 12 May 1990. Together they sang another Berger composition, You Have To Learn To Live Alone. 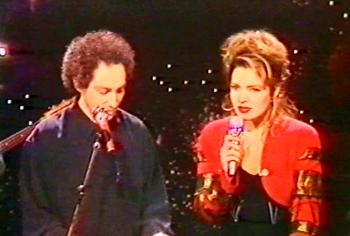 Michel Berger and Kim in the French TV programme 'Champs Elysées', May 12, 1990.