From 8 to 12 november 1993, Kim was co-presenter of this Channel 4 breakfast show with Chris Evans. In five two-hour shows, Kim participated in a show which most viewers may classify as "crazy" or "fast-paced"...

Before becoming a co-presenter, Kim already appeared on the programme once as a guest, and she would return as a guest a few times after, until the show's demise on March 29, 2002.

Kim about the Big Breakfast

On Friday 17th September, I screen-tested for (...) The big breakfast. Things went well, and despite my tripping over cables and running out of questions in an interview with a man and his dog, Amber, I was offered the job to co-host with Chris Evans for the week Gaby Roslin went on holiday. This would entail a week of 3.00 am starts, followed by 2 hours of live-TV, including comedy sketches, interviews and general larking around. It sounded hard work, but being a big fan of the show, as well as being Chris Evans' no. 1 fan, I accepted without hesitation. However, on the 4th and 5th of November, after rehearsing with Chris and the crazy Breakfast crew, I realised I'd really jumped in the deepest end I've ever jumped in. In fact, I was so nervous that had someone given me an opportunity to back out, I would have. The show looks very relaxed and fun to the viewer, but to me it was terrifying, and I wondered how I was ever going to coope with the job. Before I had time to have a nervous breakdown the show arrived on November 8th, and for the first time in my life I was a live TV Breakfast show host!
I went on to have one of the most challenging and exciting weeks of my life. I felt I really rose to the occasion, and loved working with Chris and his gang. All the nerves and self doubt flew out the window as I decided to give my very best. (1)

Mum's always been my biggest fan and she always made me feel much greater than I thought I was. I only did The Big Breakfast after great encouragement from her. I couldn't do it right up until the camera went on. It was horrendous. I said to Mum: 'I know you believe in me but you have to understand that everyone has their limitations, and this is mine.' (2) 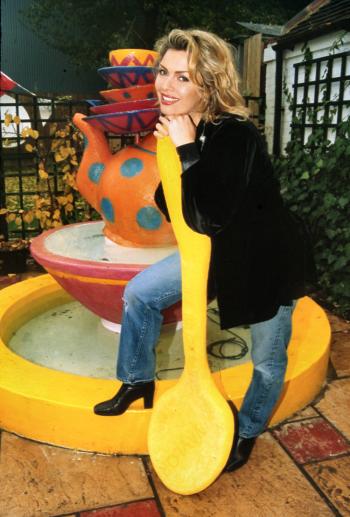 Kim Wilde posing at the set of The Big Breakfast, 1993