Born as Shirley Crabtree Jr. on November 14, 1929, Big Daddy was an English professional wrestler.
He followed in his father, Shirley Crabtree Sr.'s footsteps by becoming a professional wrestler in 1952. He became a big hit in the late 1950s and early 1960s with heel gimmicks, calling himself The Blonde Adonis, Mr. Universe and The Battling Guardsman. Crabtree won two titles in the British Wrestling Federation before he quit out of frustration and retired for roughly 15 years.

When the popularity of wrestling rose as a result of it being televised, Shirley's brother, Max Crabtree, one of the most powerful wrestling promoters in British history, brought Shirley back to wrestling under the persona he would best be remembered for, Big Daddy.
Based originally on the character of the same name played by actor Burl Ives in the 1958 screen adaptation of Tennessee Williams' Cat on a Hot Tin Roof, Big Daddy was first given life by Crabtree in the 1970s, playing the good guy. A firm fan favorite, Big Daddy came to the ring in his signature Union Flag jacket and top hat to a theme tune in the form of "We Shall Not Be Moved" by The Seekers, in 1980 Shirley Crabtree recorded his own version on EMI Records backed by rock guitarist Legendary Lonnie.
Big Daddy feuded with Mick McManus and Giant Haystacks among others and would also be noted as the first man to remove the mask from Kendo Nagasaki during a televised match.

Though Big Daddy's weight and age precluded many more novel wrestling moves; making him a frequent user of many generic wrestling throws, body slams etc. he would be met by cheers whenever he wrestled. Big Daddy's more famous attacks would involve his large abdomen to great effect often using "Belly-Butts" (thrusting his pelvis forward to slam his belly into an oncoming opponent) before finishing off opponents with his "belly-splash" in which he jumped vertically down onto the body of a fallen opponent. These more memorable moves in Daddy's arsenal were often met with chants of "Easy, Easy" from the crowd.

Throughout his career, Big Daddy raised funds for charities. His appeal to raise money for disadvantaged children led to him meeting Kim Wilde in 1983, when they both appeared in a television show for Children in Need.

In August 1987, Big Daddy bowed out of the professional wrestling spotlight after a turn of events during the final moments of the match against Mal "King Kong" Kirk. After Big Daddy had delivered his belly-splash, rather than selling the impact of the finishing move, Kirk turned an unhealthy colour and was rushed to a nearby hospital, but was pronounced dead on arrival. Despite the fact that the inquest into Kirk's death found that he had a serious heart condition and cleared Crabtree of any responsibility, Crabtree was devastated and nevertheless blamed himself for Kirk's death. He continued to make sporadic appearances into the early 90s, but eventually retired from wrestling to spend the remainder of his days in his hometown of Halifax.

Crabtree died of a stroke at the age of 68 on December 2, 1997 in Halifax General Hospital, leaving his second wife of 31 years, Eunice and six children. 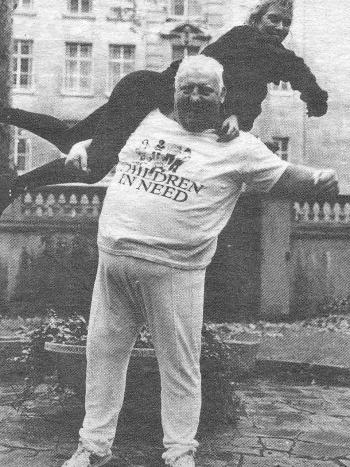