American punk-rock band consisting of Jimmy Pop, Lupus, M.S.G., Skip O'Pot2mus and Daddy Long Legs.
Together they recorded an EP called 'Dingleberry Haze' (1994) and the album 'Use Your Fingers' (1995). The latter contains a rather bizarre cover of Kim Wilde's Kids in America, a rock version which gradually develops into speedy "oi"-punk riffs, concluding at first with a false fade.
After the release of 'Use Your Fingers', three members left the band, leaving Jummy Pop and Lupus to fulfill the tour obligations. Jimmy contacted his friend, Evil Jared, to play bass on this tour. After the tour, the Bloodhound Gang continued to play, bringing in drummer Spanky G and DJ Q-ball.

Their 1996 album 'One Fierce Beer Coaster' was much more rock-inspired than its predecessor, which was for the most part hip-hop- and rap-influenced. At first it was released on the relatively small label Republic records, three months later it was re-released by Geffen Records.
Since then, they have played live with bands like Garbage, the Presidents of the United States of America, Ash, Naughty by Nature and Korn.

Their commercial breakthrough finally happened in 1999 with their single 'The Bad Touch' and the accompanying video in which they walk around in Paris dressed in monkey suits. Soon after they scored another hit with the single 'The Ballad Of Chasey Lain'.
Their version of 'Kids in America' was re-released as an extra track on their single 'The Inevitable Return Of The Great White Dope', also released in 2000. All three singles were taken from the hit album 'Hooray For Boobies', which peaked at number 37 in the UK.

In 2005, their single 'Foxtrot Uniform Charlie Kilo' became a minor hit in the UK. It was taken from their fourth album 'Hefty Fine'. Their most recent album 'Hard-off' was released in the USA only. 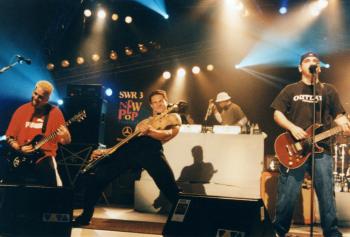