The Blue Nile formed in Glasgow, Scotland in 1981. Members of the trio are Paul Buchanan (lead vocals/guitar/synthesizers), Robert Bell (synthesizers) and Paul Joseph Moore (piano/synthesizers), all three born in this Scottish town. Their debut single, I love this life was recorded independently and subsequently released by RSO Records. The single was not a hit, but their demo tapes ended up at hi-fi manufacturers Linn, who signed them immediately.

The Blue Nile's released two albums with Linn, 'A Walk Across the Rooftops' (1984) and 'Hats' (1989). The two albums spawned a few minor hits, such as 'Tinseltown in the Rain' and 'The Downtown Lights'. After the second album, the group went on a small tour across America.
The group then signed to Warner Bros. records, and recorded 'Happiness', their third album, which was released in 1996. The album was supported by a tour across Europe.

In 2004, the Blue Nile released 'High', their fourth album. The band did not release any further albums, however in recent years they have re-released all four albums as remastered editions with a disc of bonus tracks. Paul Buchanan has also released one solo album, entitled 'Mid Air' (2012).

In the program Not fade away in 1997, Kim stated about the album Hats: 'I would have to say categorically my favourite band and the most played album in my house. Blue Nile are a band that I introduced to my husband, who had never heard of them before, and 'Downtown lights' is a song that I would have to say, is 'our tune'. We fell in love to this song as we drifted off into each other's eyes...' 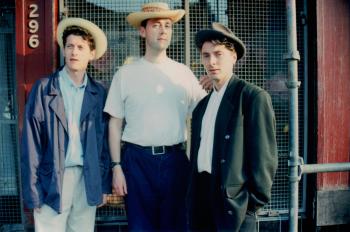