The Bouncing Souls are an American punk rock band from New Brunswick, New Jersey, formed in 1989 by Greg Attonito, Pete Steinkopf, Bryan Kienlen and Shal Khichi. They played in smaller bands during high school. Although they decided to forgo college, they made the decision to move to a college town; New Brunswick, NJ, which is the home of Rutgers University. New Brunswick had a reputation for supporting underground music. The Bouncing Souls quickly made a name for themselves.

Their first full-length album, 'The Good, The Bad & The Argyle' was released in 1994 on Chunksaah Records, their own label. The album was a compilation of several EPs the band had released previously. Two tracks of this record, 'Candy' and 'What Boys Like' served as homage to 1980s new wave while simultaneously striking a humorous jab at homophobia. Their next album, 'Maniacal Laughter' was released in 1996. Half the album was written in a week. It led to a high-profile tour with Youth Brigade that got the attention of Epitaph Records.

The Bouncing Souls signed with Epitaph in 1997 and released a self-titled album later that year. 'Hopeless Romantic' followed in 1999. Soon after the album's release, personal problems arose between the band and long-time drummer Shal Khichi which resulted in his departure from the band. He was replaced by former Skinnerbox, Mephiskapheles, and Murphy's Law drummer, Michael McDermott. 'How I Spent My Summer Vacation' (2001) was the first album released with the new line-up. A year earlier, the rarities compilation 'The Bad. The Worse. And The Out Of Print' featured a cover version of Kids in America.

In 2003, the band released their sixth album 'Anchors Aweigh', as well as their first DVD, 'Do You Remember? 15 Years of the Bouncing Souls'. Between 2006 and 2016 they released four more albums. On 25 June 2013, The Bouncing Souls confirmed that drummer Michael McDermott would be leaving the band in order to 'pursue other musical interests'. In September 2013, George Rebelo of Hot Water Music and Against Me! officially joined the band as the new drummer during a secret show at Asbury Lanes. 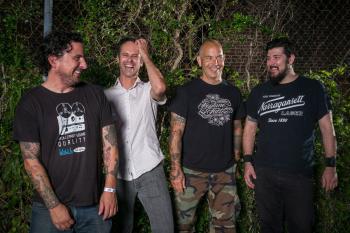