Born as David Robert Jones, 8 January 1947, Brixton, London, England. He began playing saxophone during his teens, initially with various school groups. As a result of a playground fight, the singer was left with a paralysed pupil, being stabbed in the eye with a school compass. The accident would later enhance his otherworldly image.

In the early '60s Bowie was still searching for his own style. He recorded a novelty single 'The Laughing Gnome', which would only become a hit in 1973. In 1969 he had his first UK chart hit with 'Space Oddity'.

Unfortunately, Bowie seemed unable to follow up the single with anything similarly clever and when 'The Prettiest Star' flopped, most critics dismissed him as a one hit wonder. Bowie then completed his first major work, the album 'The Man Who Sold the World'.
In 1971, Bowie was signed to RCA for a reportedly large advance and completed 'Hunky Dory' in 1971. In June 1972 the album 'The Rise and Fall of Ziggy Stardust and the Spiders From Mars' was released. Here, Bowie embraced the persona of an apocalyptic rock star whose rise and fall coincides with the end of the world.
Bowie undertook a world tour and scored a UK number 1 album with 'Aladdin Sane', another concept work which centred on global destruction as its main plot.
Bowie then took an unlikely detour by recording an album of his favourite mid-'60s songs, 'Pin-ups'. His next work 'Diamond Dogs' lacked the familiar sound of the 'Spiders from Mars' and especially the cutting guitar work of Mick Ronson.
Bowie's popularity was as great as ever in the mid-'70s when he effectively righted the wrongs of history by taking 'Space Oddity' to number 1, six years after its initial UK chart entry. That same year, he also enjoyed his first US number 1, 'Fame', which was co-composed by John Lennon, who also performed backing vocals on the track. The song appeared on his next album, 'Young Americans', which saw the emergence of a new Bowie, successfully tackling Philadelphia soul.
Bowie then started working on Nicholas Roeg's film 'The Man Who Fell to Earth', in which he was given the leading role of the displaced alien marooned on Earth. The movie received mixed reviews. Returning to London, Bowie was reprimanded in the press for allegedly displaying a Nazi salute and suggesting that his home country needed a 'new Hitler'. His fascist flirtation was partly provocative and perhaps related to the self-grandeur stemming from his heavy use of cocaine during the period. The image was crystallized in the persona of the Thin White Duke, the icy character who came to life on his next album, 'Station to Station'.
After this album he started working with producer Brian Eno. The duo relocated to Berlin for a cycle of albums which displayed Bowie at his least commercial and most ambitious. 'Low' and 'Heroes', both released in 1977, were predominantly instrumental works whose mood was strongly influenced by Eno's minimalist electronics. Bowie concluded his collaborative work with Eno on 1979's 'Lodger'. Generally regarded as the least impressive of the Eno trilogy, it nevertheless contained some strong songs, including the hit single 'Boys Keep Swinging'.
Bowie then accepted a role in the Broadway production of "The Elephant Man". During the show's run in Chicago, Bowie released an album of new material which leaned closer to the rock mainstream. 'Scary Monsters (and Super Creeps)' (featuring cover artwork by Edward Bell) was an adventurous album, containing the reflective 'Ashes to Ashes', which included references to one of Bowie's earlier creations, Major Tom. The song was Bowie's first UK number 1 since 'Space Oddity'.

The early '80s saw Bowie taking on a series of diverse projects including an appearance in Bertolt Brecht's Baal, surprise chart collaborations with Queen ('Under Pressure') and Bing Crosby ('Peace On Earth/Little Drummer Boy') and two more starring roles in the films 'The Hunger' and the critically acclaimed 'Merry Christmas Mr Lawrence'. A switch of record label from RCA to EMI saw Bowie release his most commercial work since the early '70s with 'Let's Dance', produced by Nile Rodgers. The title track of the album gave Bowie his third solo UK number 1 and effectively revitalized his recording career in the process. The Serious Moonlight tour which accompanied the album, played to over two million people and garnered excellent reviews. That same year (1983) he had two further hits both narrowly missing the top spot in the UK charts with 'China Girl' and 'Modern Love'.
Bowie quickly released the next album, 'Tonight', which attracted universally bad reviews, but managed to spawn a hit single with 'Blue Jean', accompanied by a lengthy video clip. During 1985, Bowie was chiefly in demand as a collaborator, first with the Pat Metheny Group on 'This Is Not America' (from the film 'The Falcon and the Snowman') and next with Mick Jagger on a reworking of Martha & The Vandellas' 'Dancing In The Street' for Live Aid. In 1986, Bowie moved into acting, while also providing music for the movies in which he appeared: 'Absolute beginners' and 'Labyrinth'. Bowie also sang the theme of the anti-nuclear war cartoon film 'Where the Wind Blows'.

Bowie released the album 'Never let me down' in 1987. While the album was critically slammed, the accompanying Glass Spider tour was universally acclaimed. Never predictable, Bowie decided to put a group together in 1989 and called upon the services of Reeves Gabrels (guitar), Tony Sales (bass) and Hunt Sales (drums). The unit took their name from the title song of their new album, 'Tin Machine', a set that displayed some good, old-fashioned guitar work, occasionally bordering on heavy metal. It was an interesting experiment but neither the album nor the tour did much to increase Bowie's critical standing in the late Eighties.

Ironically, it was the re-release of his back catalogue on CD that brought a more positive response from his followers and in order to promote the campaign Bowie set out on a greatest hits tour. During this tour, Kim Wilde was guesting as opening act in several European countries.

'Black tie white noise' was his first studio album of new solo work in years and entered the UK album charts at number 1. Enlisting Nile Rodgers again as producer the album contained the hits 'Jump They Say' and the title track. In 1995, he released '1. Outside', another planned trilogy produced by Brian Eno.
His next release, 'Earthling' was recorded in a short time and featured loads of influences from the contemporary drum and bass trend. The following album, 'Hours', was a return to rock form, whereas 'Heathen' and 'Reality' strengthened Bowie's reputation as a gifted singer/songwriter. During the 'Reality' tour David suffered heart problems, causing him to retreat from the public eye for a long time.

On her album Snapshots, Kim recorded a cover of the David Bowie song Kooks, with guest vocals by Hal Fowler.

David Bowie returned in 2013 with the album 'The Next Day'. The album was a surprise for many, while it was recorded in secret, with only a few close collaborators knowing that Bowie was back recording again. When the album was released, it was a big surprise for everyone. Critics were very positive about the album and sales were sufficiently good to warrant a special edition release near the end of the year. Near the end of 2015, another new album was announced. 'Blackstar' was released on 9 January 2016, one day after his 69th birthday. The album was lauded by critics, calling it an innovative piece of work, and even more exciting than 'The Next Day'.

Bowie passed away on 10 January 2016, having battled cancer for 18 months.

I fell in love passionately with Bowie. I was floored by him, but it passed after a while. (1)

He is a Londoner, down to earth and enormously talented. It was great to hear him, during his "Greatest Hits"-tour. I fell madly in love with him. He wasn't interested in me in the slightest, because he was just falling in his love with his later wife, Iman. He broke my heart every night again, when I watched him and realised I would never be Mrs. Bowie. But I have lovely memories of that tour. It was wonderful. (2)

I did have a major crush on David Bowie when I was touring with him. Unfortunately the feelings weren't mutual. (3)

I did actually fall madly in love with David Bowie on that tour; I just thought he was the most gorgeous man in the world. Of course, he’s just a London bloke who used to pop his head in, ask how I was and wish me luck. He was a very down-to-earth, lovely, amazing creature. It was his greatest hits tour and it was a real honour to be on that. (4) 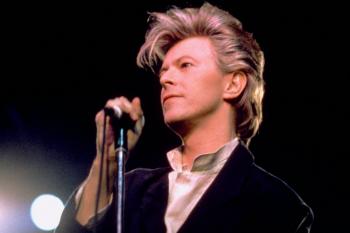 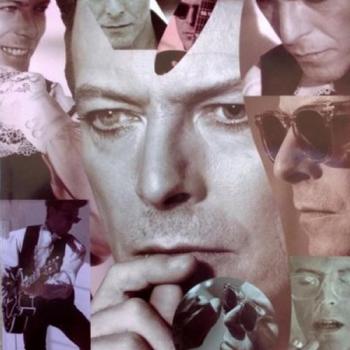 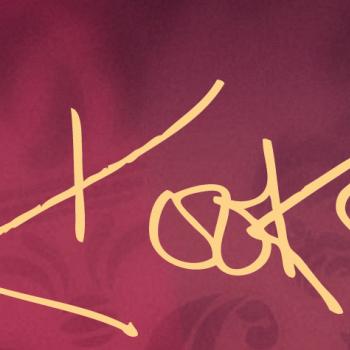