Born as George Alan O'Dowd at Barnehurst Hospital in Bexley, Kent on June 14, 1961, George became a follower of the English New Romantics movement which was popular in Britain during the early Eighties. He lived in various squats around Warren Street in Central London. He and his friend Marilyn were regulars at The Blitz, a trendy London nightclub run by Steve Strange of the group Visage. His androgynous style of dressing caught the attention of Malcolm McLaren, who arranged for him to perform with his group Bow wow wow. After leaving the group he formed his own band Culture Club with Mikey Craig (bass), Jon Moss (drums) and Roy Hay (guitars & keyboards).

After signing with Virgin Records, their career took off with the single 'Do You Really Want to Hurt Me' and the album 'Kissing to Be Clever'. Several hit singles and a few accompanying albums followed. While the band were still doing quite well, rumours started circulating that Boy George was addicted to drugs. He was arrested in Britain for possession of cannabis. Shortly thereafter, keyboardist Michael Rudetsky, who co-wrote the song 'Sexuality' on Culture Club's 1986 album 'From luxury to heartache', was found dead of a heroin overdose in George's London home. Rudetsky's parents filed a wrongful death suit in Britain against George, seeking financial damages for their son's death. With George's drug addiction, the underwhelming performance of their last two albums, a soured romance between band members shrouded in secrecy, and a wrongful death lawsuit looming, the group ultimately disbanded.

George eventually won the court case against the Rudetskys and would agree to seek treatment for his addiction. He would however lose another friend, Mark Vaultier, who overdosed on methadone and Valium at a party. George never made it to the party: he had been arrested en route to the party on suspicion of carrying drugs.

In 1987, Boy George released his first solo album 'Sold' and the accompanying single 'Everything I Own', a cover of a song by Bread, was a big hit in several countries. Subsequent albums weren't as succesful. Still, George formed his own record label in 1989 and started recording as part of the band Jesus Loves You, their material mainly inspired by spirituality. In 1992, he had a major UK and US hit with the song 'The Crying Game', produced by the Pet Shop Boys for the movie of the same name. A second career as a DJ meanwhile also took off. While still recording music, a lot of his songs were never officially released.

The rock-driven album 'Cheapness and Beauty' was released in 1995, but it wasn't very successful, although the single 'Same Thing in Reverse' was a minor hit in the USA. In 2002, the album 'U Can Never B2 Straight' was a collection of rare and lesser known acoustic tracks. It received some of the best reviews of his career, but was only released in the UK and Japan.

Meanwhile, Boy George had several other commitments: a radio show on London's LBC 97.3, a column in the Sunday Express (one of which mentioned Kim Wilde) and a fashion line called B-Rude.

During a press launch in October 2008, it was revealed that Boy George and Kim Wilde were going to be the headliners at the Here and Now Tour 2009. They appeared for a photo call together with Nathan Moore, Hazel O'Connor, Howard Jones and Kid Creole and the Coconuts. However, on December 5, 2008, George was convicted in Snaresbrook Crown Court, London, of the assault and false imprisonment of Audun Carlsen - a Norwegian who was paid £300 at the end of a session (which included sex) in George's apartment on their first encounter. On January 16, 2009, George was sentenced to 15 months' imprisonment for these offences. As a result, he did not appear during the tour and was replaced by Rick Astley.

After having done his time in prison, Boy George resumed his successful DJ career embarking on a worldwide tour of clubs. In 2009, he signed a new record deal subsequently releasing the album 'Ordinary Alien – The Kinky Roland Files' in the autumn of 2010. The album consisted of previously recorded tracks mixed by longtime dance partner Kinky Roland. He took part in Night of the Proms.

The album 'This is what I do' was released in October 2013. Since 2012, Boy George has credited his practice of Nichiren Buddhism and chanting Nam Myoho Renge Kyo for his newfound spiritual strength to remain sober. 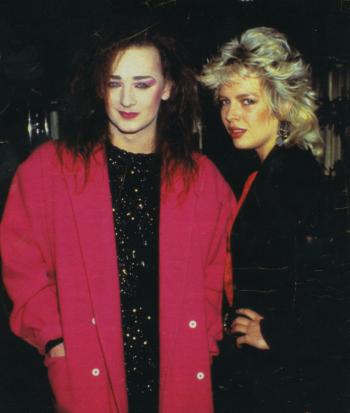