During an annual event, the British Phonographic Industry (BPI) gives away much coveted awards, known as 'The Brits' to recording artists from the UK and abroad. In February 1983, Kim Wilde won an award for Best Female artist.

Kim about the BPI Award

Luckily I decided to go looking rather smart in a very over-the-top pale blue skirt and jacket. I had no idea how posh it was going to be, and in fact I was going to just sling on my black leather jacket; but I got talked out of it. It just so happens I got talked out of that by someone who had rather a good idea that I might win! I was sure I hadn't got a hope in hell of winning against such competition from Toyah, Sheena Easton and Mari Wilson. Ricky, my brother, came with me. To my great surprise sitting on the table right next to us was Paul and Linda McCartney and Michael Jackson, all of whom I was very honoured to meet later on. It really was a very special evening with all the top names of the music industry, and I was very nervous and excited, but also a little sad as I really didn't believe I was in with a chance. I found out later that everyone on my table knew I was going to win and none of them told me. So when Angela Rippon read out my name I nearly fell through the floor. By the time I got to the stage to pick up my award, I was so overcome I couldn't say a word. It was the most emotional experience of my life. I got Angela to say a few words of thanks to everyone there, but especially to the three most important people, my Mum and Dad and Ricky. (1) 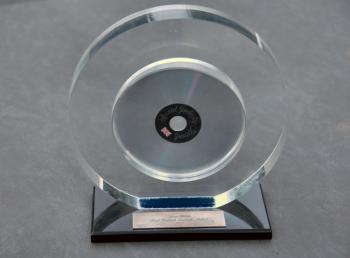