Bucks Fizz are a British pop group named after an alcoholic drink made from champagne and orange juice. Formed in 1981 to compete in the Eurovision Song Contest, they actually won with their debut single 'Making Your Mind Up' and went on to have a successful pop career. The initial group members were Jay Aston, Cheryl Baker, Bobby Gubby (a.k.a. Bobby G) and Mike Nolan, the classic 'two male - two female' Eurovision line-up established by Abba.

Already experienced singers they were gathered together by producer/writing combo Nichola Martin and Andy Hill. The group were quick to build on their Eurovision success, 'Making Your Mind Up' was their first number one in March 1981. They followed up with two Top Twenty singles and a further number one in November 1981 with 'The Land of Make Believe' and also an self-titled album. In 1982 the group had their final Number One in March with 'My Camera Never Lies' and their output of singles slowed as they concentrated on touring, their last Top 50 hit came in 1986.

In December 1984 the group's tour bus crashed and Nolan was badly injured. In 1985 Aston left and was replaced by Shelley Preston. They had some success with the aptly named single 'New Beginning' in 1986. Preston left in 1989 and the group decided to continue as a trio. Baker, with some successful television work, left in 1993 and the 'female space' was filled by Heidi Manton and Amanda Szwarc. After 15 years, Mike Nolan left the band in 1996 to pursue a solo career and was replaced by David Van Day who used to be in the 80s pop group Dollar. David was later replaced by Graham Crisp and then Wayne Chinnery. Bobby G married Heidi Manton in 1999. Amanda Szwarc was replaced by Louise Hart and she by Nikki Winters.

David van Day, meanwhile, got together with Mike Nolan and started a second group called Bucks Fizz. This eventually led to a legal dispute. Van Day was served an injunction in June 2001 by the original Bucks Fizz company New Beginning. The following month a judge refused to stop Van Day using the Bucks Fizz name, leaving two groups working under the same title. Mike Nolan left the revived Bucks Fizz he had been leading with Van Day shortly afterwards, after a dispute. In August 2002, the matter was settled out of court. Original member Bobby G won the right to keep the group's name, whereas David Van Day was ordered to tour under the name David Van Day's Bucks Fizz Show. This venture was short-lived and Van Day returned to performing as Dollar.

In June 2004, the original members Bobby G, Mike Nolan and Cheryl Baker, together with Shelley Preston got together for the Here and Now Tour 2004 in December 2004. They joined Kim Wilde and others for seven dates across the UK. BMG re-released all the Bucks Fizz albums in subsequent years, as well as two albums called 'The Lost Masters' and 'The Lost Masters 2'.

Two different Bucks Fizz entities continue to exist during the 2010s: Bobby G enlisted Heidi Manton, Tammy Choat and Paul Yates to perform as Bucks Fizz, whereas Cheryl Baker, Mike Nolan and Jay Aston have renamed themselves The Fizz and recorded three albums with Mike Stock: 'The F-Z of Pop' (2017), 'Christmas With the Fizz' (2018) and 'Smoke & Mirrors' (2020). 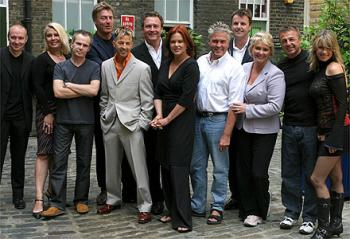