Born in Nottingham, England in 1983. Interested in music from an early age, Steve took up the organ at 7 before starting guitar at 11. At 14, Steve had switched to bass guitar, formed a band and started learning how to use the school PA system for rehearsals and gigs. Soon he started learning how to use sequencers, recording equipment and running the sound for bigger school productions from behind the bass and/or keyboards.

At 18, Steve enrolled at the University of Surrey to study Music and Sound Recording, the Tonmeister course, full-time. Shortly after, he also began working at the Guildford Civic Hall, doing sound for their local bands nights and shows touring without production. He also helped with the lighting and general local crew work for bigger tours visiting the Civic until they closed down for refurbishment in December 2003.

Graduating in June 2005, Steve moved to London and started working as a freelance live sound engineer. Since then, he's worked with many different artists such as the Original Wailers, Jason Derulo, Culture Club, Howard Jones and Pixie Lott. Steve has been mixing the stage sound for Kim Wilde since 2010 and has become a familiar face at most of her live concerts throughout Europe and in the UK. 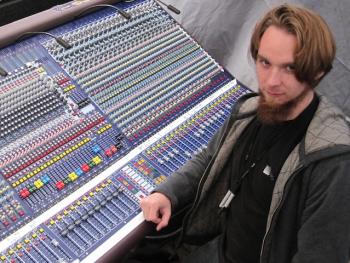