Born in Sheffield, Yorkshire, September 25, 1955, son of a steelworker and a waitress. Steve got his first guitar at Christmas 1963 as the Beatles took over the world. Started learning to play it but then preferred football. Played rugby for Yorkshire and an England trial, but was injured. Left school at 15 after a fight with the headmaster. After becoming an apprentice electrician in 1970, Steve earns enough money to buy a Fender Stratocaster. He practices 8 hours a day and subsequently becomes resident musician at the Crucible theatre in Sheffield. He then sends a tape of his band to Polydor in 1974 and gets signed to the Afro Jazz band Zzebra. The band tours Europe, then disbands when punk takes over the music scene. Steve plays on the London punk scene, and plays with Sonja Kristina after Curved Air.
Recording at Ian Gillan studios as a session player, Steve joins his band Gillan for one studio and one live album in 1978/1979.

Steve auditioned for Kim's first live tour in 1982 and stayed on ever since. He was doing promotion and tours with Kim, while also touring and recording with the Buggles, Kids from Fame, Billy Ocean, Samantha Fox, Frankie goes to Hollywood and many more. In 1986, he co-writes Another Step (Closer to You), Kim's first self-penned single hit. He also writes Hey Mister Heartache, Missing, The Thrill of It, Too Late with Kim and Light of the Moon (Belongs to Me) with Kim and Ricki in following years.
Steve and Kim also write Ces Moments La together for singer Muriel Dacq.

With ex-Culture Club drummer Jon Moss he forms Heartbeat UK, who release one single called 'Jump to It'. The album isn't released after falling out with record company Virgin.
Steve goes on to write and record with Kim Appleby, Martha (from Martha & the Muffins), Jay Aston (ex-Bucks Fizz) and Lena Fiagbe.
Steve then returns to Kim and continues to write and tour with her until the Hits Tour in 1994.
Since then, he has made a big name for himself composing and recording film and TV music for Zomba. He also plays with the bands The Mods and 4 Bills and a Ben, playing to a loyal crowd on the UK club scene. He appeared in a Steve Marriott Memorial live dvd.
Steve founded Byrdsongs in April 2011 and started to release his entire 30 years of recordings of his music, available from the website.

Until 2005, Steve was married to Kim, the couple had one daughter (Mel) and one son (Adam). He then had a relationship with Kathryn and they had a daughter named Georgina, born in January 2006.

Steve passed away on October 2, 2016 in Munich (Germany) after suffering a heart attack. 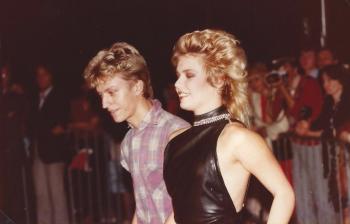