Born May 20, 1952 in Victoria, British Columbia, Canada. Warren joined the band Ultravox after a 'drummer wanted' ad appeared in the UK magazine Melody Maker. The band functioned for six years with front man John Foxx, until they were dropped by their record label Island after having no success with their record releases.
Things changed when Midge Ure joined the band. In 1980, they released the album 'Vienna' for Chrysalis, and the title track became an instant classic. For five years, Ultravox was a household name in the pop industry. In 1986, personal differences led to Warren leaving the band. Warren did some session work as a drummer with various artists. In 1988, he joined Kim Wilde's band for a year.

It's not fair to Kim to say she looked like Debbie Harry. No dispect intended but after having been in the company of both, I can assure you that Kim looks waaaaay better than Ms. Harry! Beyond gorgeous. Way beyond. (1) 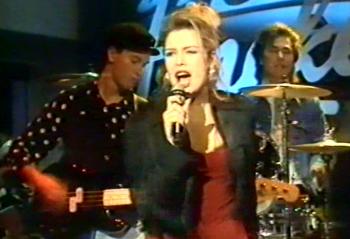 Kim performing on the Dutch TV programme 'Tineke' on December 3, 1988 with Warren Cann on drums