Cappella scored a major and somewhat unexpected success in 1989 when their Heylom Halib crashed the UK Top 20 (number 11). It was made by Gianfranco Bortolotti's Media Records empire, which soon became the dominant force in Euro dance/techno. Although their founder continued to release a number of records under various umbrella names, he has retained that of Cappella as his priority act.
Cappella's first chart entry had come the year before, when Push The Beat was a minor hit. Bortolotti subsequently employed two Londoners, Rodney Bishop and Kelly Overett, as full-time members of the project. They continued to score hits throughout the '90s, most notable of which was the number 25-peaking "Take Me Away", licensed to PWL in the UK. This featured the guest vocals of Loretta Holloway, which is ironic because Capella's success instigated the Italo-house scene, the biggest commercial hit of which was Black Box's "Ride On Time", on which Holloway's vocals were sampled. Hits through 1993 continued with the typically immediate and anthemic "U Got 2 Know". They followed it with the similarly styled but equally successful "U Got 2 Let The Music" and "Move On Baby", before the advent of their debut album.
In 1993, Cappella were responsible for the highly dancable and melodic remix of Kim Wilde's Kids in America called Kids in America 1994. 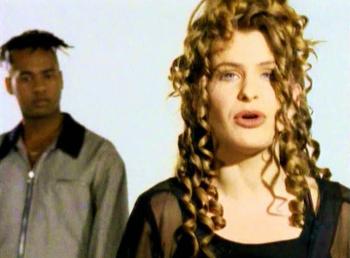