Born August 17, 1958, in Hollywood, California, USA as the oldest of seven children. She was raised in California's San Fernando Valley. After graduating from high school in 1976, she met Charlotte Caffey, Jane Wiedlin, Gina Schock and Kathy Valentine. They subsequently formed the pop group the Gogo's.
In 1981, the group signed with IRS records, and recorded the album 'Beauty and the Beat'. This album sold more than two million copies and topped the charts for six weeks. The follow-up, 'Vacation' (1982) was less successful. The third album, 'Talk Show' (1984), flopped. Wiedlin then announced that she was leaving the group, and Caffrey and Belinda Carlisle soon followed. They officially split up in May 1985.

Although the group had a funloving, happy kind of image, several members of the group, including Carlisle were taking drugs and alcohol. After the split, Carlisle decided to sort out these problems by dieting and joining Alcoholics Anonymous. She also met Morgan Mason, a talent agent whom she married on 12 April 1986. Inspired by her newfound love and her renewed physical state - she lost 60 pounds - Carlisle started working on her debut solo album, 'Belinda', which was released in 1986. An assortment of love songs, Belinda spawned the hit track 'Mad About You', and also featured such tunes as 'I Need a Disguise', 'Shot in the Dark' and 'I Feel the Magic'. Former Go-Go's members Caffey and Wiedlin helped with the LP.

Carlisle's career really took off in 1988, when the hit single 'Heaven Is a Place on Earth' from her second album, 'Heaven on Earth', became a worldwide hit. The song, which was written by Rick Nowels and Ellen Shipley, was nominated for a Grammy Award. Nowels and Shipley were also responsible for Belinda's other worldwide hit, 'Circle in the Sand'.
The third album, 'Runaway Horses' (1989) and the fourth album 'Live Your Life Be Free' (1991) reaffirmed Carlisle's reputation as a pop singer, and had critics decrying her failure to offer meaningful lyrics and an innovative sound.

After releasing a Greatest Hits album in 1992 and the album 'Real' (1993) which went by unnoticed, things went quiet for a while, until Belinda made her comeback with 'A Woman and a Man' (1996), which contained single hits 'In Too Deep' and 'Love in the Key of C', both written by Rick Nowels.
These days, Belinda Carlisle is often compared to Kim Wilde as the American counterpart to Kim. These comparisons started when Kim recorded Love Is Holy, another song written by Nowels & Shipley.

In 2007, she released 'Voila', her first album in over a decade, featuring songs in French. After a decade of live performances and re-released albums and compilations, she released another new album in 2017, entitled 'Wilder Shores'. This eighth studio album featured Gurmukhi chants, inspired by her practising of Kundalini yoga. 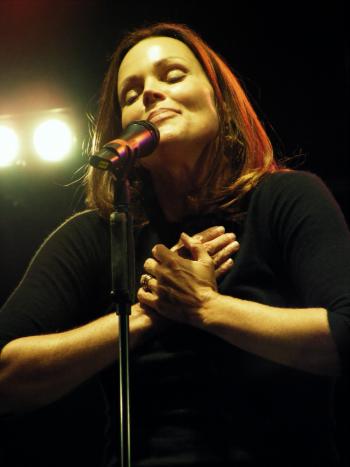