On August 19, 1883, Jeanne Gabrielle Chanel was born. She was the daughter of Albert Chanel, a market trader, and his wife Jeanne Devolle. After many years spent travelling with her parents and in convent schools she became a singer when she was 20 years old. She sang songs like "Ko ko ri ko" and "Who's seen Coco in the Trocadero?", which made her known as "Coco", a nickname she kept for all her life.
When her singing career didn't take off, she started sewing for various people and taking an interest in fashion. She started to make clothing which she sold in her own shop in Deauville. Due to the success of this shop and some others she opened around France in the following years, she became very well known all over the land, including the capital city of Paris.

Gabrielle met Grand Duke Dmitri Pavlovich in Biarritz when they were both on holiday there. It soon became clear that they were very attracted to each other, even though he was eleven years younger than she was. A member of the Romanov family, he had been treated as a son by the tsar, but he had survived the war and now had very little money. They lived together for a year. In that year, 1920, Chanel's most successful product was created: the no. 5 perfume.

Until then, all perfumes had been based on natural flower fragrances. These were very concentrated essences but once in use the perfume quickly evaporated and faded. Dmitri had grown up in the Russian court where perfumes were used in large quantities. He was acquainted with Ernest Beaux, a perfume chemist at Grasse, the centre of the perfume industry. So it happened that Gabrielle too became acquainted with Ernest Beaux and the idea for her own perfume evolved. This was to be based, not on flower essences, but on eighty different ingredients, creating a more stable base and a distinctive abstract perfume and could also be used in smaller quantities. Gabrielle left the mixing of the ingredients to Ernest Beaux, but she made the final decisions about the finished product, sampling it several times before deciding on the perfume that she thought reflected the image she wanted to portray. Even the bottle was a totally new concept, moving away from the elaborate, frivolous designs of other manufacturers to a sharp cornered cube, in which the perfume was visible through the glass. The label was also devoid of ornament, in plain white, with the words 'No. 5 Chanel' printed in black.

The perfume was an immediate success, and although many manufacturers tried to copy the concept, they didn't succeed. Parfums Chanel was founded in 1924, run by Pierre and Paul Wertheimer, and with Ernest Beaux as its technical director.

No. 5 is still sold around the world nowadays, and became the favourite perfume for many women, including a few famous ones like Marilyn Monroe, who confessed to wearing nothing but the perfume in bed at night. 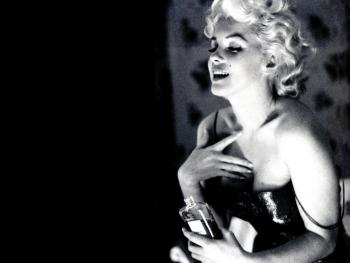