Keith Chegwin was born in Walton, Liverpool (UK) on January 17, 1957. While at school, Chegwin auditioned and gained roles on TV, film and stage. He appeared in Children's Film Foundation productions, including as Egghead Wentworth in 'The Troublesome Double' (1967) and 'Egghead's Robot' (1970). His last major acting role was the title role in the film 'Robin Hood Junior' (1975).

Chegwin performed in West End stage shows such as 'Tom Brown's School Days' with Russell Grant and Simon Le Bon, and 'The Good Old Bad Old Days' with Anthony Newley and in 'Captain Pugwash'. He had a career as a singer releasing singles on the Pye Records label, making it into the charts with the band Kenny when "The Bump" reached number 19 in UK Singles Chart. He also worked as a disc jockey for 194 Radio City in Liverpool, and worked at BBC Radio 1 on Tony Blackburn's weekend morning show for four years.

In the mid 1970s, Chegwin moved away from acting, becoming a household name presenting programmes such as 'Multi-Coloured Swap Shop' (1976–82), 'Cheggers Plays Pop' (1978–86) and, in the 1980s, 'Saturday Superstore'. Chegwin was known for his off the cuff ad-lib style of broadcasting. He stated that no one had ever written a word for him. Chegwin's career waned in the late 1980s and 1990s, due to his alcoholism, as detailed, in his own words, in his semi autobiographical book, 'Shaken But Not Stirred'. Chegwin stopped drinking after his appearance on the Richard and Judy show 'This Morning' on 5 November 1992. Chegwin's career regained speed in 1993 when he presented the 'Down Your Doorstep' outside broadcast segment on The Big Breakfast. On December 6, 1994 he appeared on Kim's doorstep for a fast-paced visit to her home, during which Kim was asked to sing Kids in America in her own shower.

In 2000 Chegwin presented his own internet TV show, where his daily audience for the seven-week trial reached over 250,000. Chegwin presented the Yorkshire Television-made Channel 5 nudist gameshow 'Naked Jungle', appearing naked except for a hat. He identified making the show as "the worst career move" in his life. Chegwin worked for seven years on GMTV. In 2006 he appeared as himself in an episode of Ricky Gervais and Stephen Merchant's comedy series 'Extras'.

In November 2011 Chegwin played himself in the comedy horror film 'Kill Keith'. He also made an appearance in Ricky Gervais and Stephen Merchant's comedy series 'Life's Too Short' with Shaun Williamson and Les Dennis. In August 2012, he was presented with a Lifetime Achievement Award at the National Reality TV Awards.

In 2015 Chegwin took part in the fifteenth series of 'Celebrity Big Brother' on Channel 5. On 6 February, he finished in fourth place. He regularly appeared in pantomimes, such as in the March 2016 with the Easter pantomime tour of 'Beauty and the Beast'.

On 11 December 2017, Chegwin's family announced that he had died following a long battle with the lung disease idiopathic pulmonary fibrosis. Chegwin died at his home in Shropshire having moved there earlier in 2017. 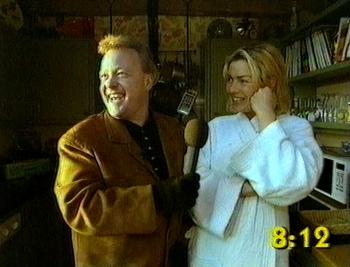 Keith Chegwin and Kim Wilde in The Big Breakfast, December 6, 1994