The Chelsea Hotel is a well-known hotel in the neighborhood of Chelsea in Manhattan, New York City. It is located at 222 West 23rd Street, between Seventh and Eighth Avenues. Built in 1883, the hotel welcomes guests, but is primarily known for its long-term residents: artists, musicians, and writers.

Founded as one of New York's first apartment cooperatives in 1884, the Chelsea opened as a hotel in 1905. Cheap rooms and an open-minded approach made it popular with the Beat poets in the 1940s. Owing to its long list of famous guests and residents, the hotel has an ornate history, both as a birth place of creative modern art and punctuated by tragedy catching the public eye.

Sir Arthur C. Clarke wrote 2001: A Space Odyssey while staying at the Chelsea, and poets Allen Ginsberg, Gregory Corso and Richard and Rebecca Eller chose it as a place for philosophical and intellectual exchange. It is also known as the place where the writer Dylan Thomas was staying when he died of alcohol poisoning on November 4, 1953, and where Nancy Spungen, girlfriend of Sid Vicious of the Sex Pistols, was found stabbed to death on October 12, 1978.

Despite, or maybe because of, such incidents, the Chelsea is still a draw for musicians. Rufus Wainwright composed his second album, 'Poses', during six months as a resident in 1999 and Ryan Adams wrote Hotel Chelsea Nights as an ode to his stay.

Kim Wilde filmed the video for This I swear in the hotel in 1995. 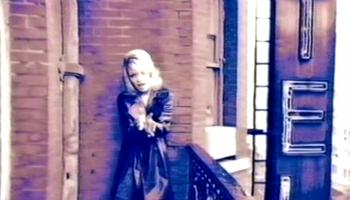 Kim at the Chelsea Hotel. Still from 'This I swear' music video.