Town, north central Ukraine, located aproximately 130 km (approximately 80 mi) north of Kiev and 20 km (12 mi) from the nuclear power plant, one of the reactors of which, on April 26, 1986, went out of control and caused the world's worst known reactor disaster to date. An improperly supervised experiment conducted with the water-cooling system turned off led to the uncontrolled reaction, which in turn caused a steam explosion. The reactor's protective covering was blown off, and approximately 100 million curies of radionuclides were released into the atmosphere.
Some of the radiation spread across northern Europe and into Great Britain. At the time, Soviet officials tried to keep the disaster quiet but eventually realised they couldn't.

Soviet statements indicate that 31 persons died as a result of the accident, but the number of radiation-caused deaths is yet unknown. More than 100,000 Soviet citizens were evacuated from areas around the reactor site, and Chernobyl and some other settled regions remained unoccupied one year later. Officials who were responsible for the reactor were tried in 1987, and six persons were sentenced to labor camps. The other three Chernobyl reactors were returned to operation that same year, and the immediate evacuation zone of the disaster was later declared a national park. In 1991 the government pledged to close down the entire Chernobyl plant, but energy demands delayed the move. In mid-1994 Western nations developed an aid package designed to ensure the closure of the unsafe plant. The plant, however, is still in service - even now, in 1999.
This disaster inspired Kim Wilde to write Schoolgirl. That song is dedicated to her sister Roxanne and describes a world threatened by environmental disasters.

Kim: 'Schoolgirl' was inspired by Roxanne, and it was written directly after the Chernobyl disaster. Chernobyl is such a shameful thing, something everyone in the world must take responsibility for, and everyone must do their part to never let it happen again. 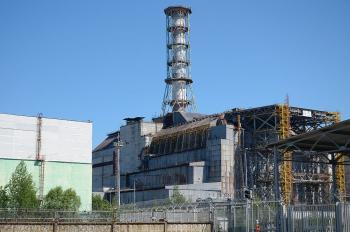