Kim Wilde has had doubts in the past about having children. However, she has stated numerous times that with the right man she would like to have them at some stage.
After her marriage with Hal Fowler it was quite obvious that she wanted to have children as soon as possible.
In May 1997 Kim announced her first pregnancy. She now has two children: Harry and Rose.

Everytime I hear a screaming kid I think: I couldn't do it. And I love kids so much, you know. I spend a lot of time with my niece and my nephew and my brother and my sister and every time anywhere. Anytime there's a kid around I normally get on with it. Sometimes I don't, but normally I do. And young teenagers and people, I just really do get on well with young people. And I just presume I'll be really good at having a kid and looking after it. But sometimes when I'm travelling, I just think... The responsibility! (1) 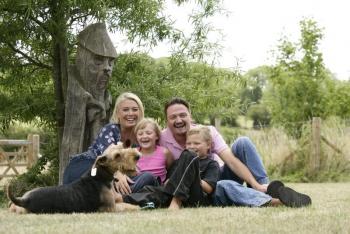