Preparation made from the fruit of the cacao tree and used as a flavoring and as an ingredient of beverages and various kinds of confectionery. Chocolate was brought to Europe by the Spaniards, who learned its use from the Aztecs at the time of the invasion by the Spanish adventurer Hern?ort's in 1519. It was introduced into England about 1657. In the United States, chocolate was first manufactured at Milton Lower Mills, near Dorchester, Massachusetts, in 1765.

Chocolate is one of my pet hates because I love it so much. I've got an incredibly sweet tooth. I have to restrict myself though, because it doesn't go too well with weight and everything. And of course it gives you spots. But I do indulge occasionally. I'm not that cruel to myself. I love "Toblerone". You can get white "Toblerone"s over in Switzerland and these wonderful chocolate liqueurs. I can't remember what they're called but they're my favourites of all. (1) 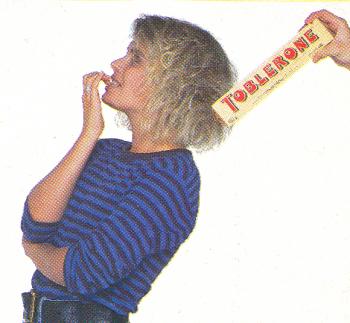