City Seventeen was founded by Rhys Copeland and Chris Barber, childhood friends. Their first foray into music came through late nights with borrowed instruments and little sleep, creating instrumental sound snippets, recorded direct to two-track. When they left their hometown of Sheffield for different universities, the recordings became less frequent, though more varied in arrangement and composition as they each followed their own musical paths, bringing new ideas back to the next collaboration.

In 2004, Rhys relocated to Cambridge, and Chris soon followed. They rented accommodation together, and at this point the experimental sessions began again in earnest. By this time, they had developed an interest in developing better recording techniques and began investigating full multi-tracking and sequencing. Shortly after, they met Jon Callan, a drummer who had also relocated to Cambridge. They bonded over mutual eclectic listening habits, and Jon was soon drafted in as the third member of the as yet unnamed group.

Rhys and Chris passed Jon a cassette tape of the material they had been working on, and all three began routine rehearsals in dedicated spaces. What followed was the group's first release, EP1, a cold and claustrophobic twenty minute journey of instrumental music.

Work for EP2 was embarked upon immediately, and after six months the material for EP1's stylistic counterpart was completed. The group hired a local church and began recording sessions in the following summer. Several more months passed before the sessions were scrapped, as the band didn't feel that the quality was high enough to justify continuing, and they began re-working the material. In the interim, they recorded several singles, one of which has been turned into a short film by independent filmmaker and friend Sarah Wood.

Their second single WWSYD? featured the track Kim Wilde as an extra track. It was released in October 2011. 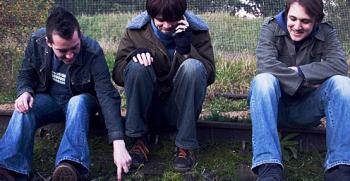