The Colston Hall is a concert hall situated on Colston Street, Bristol, England. A popular venue catering for a variety of different entertainers, it seats approximately 2,075 and provides licensed bars, a café and restaurant. The venue is owned by Bristol City Council, but since April 2011 it has been run by the independent Bristol Music Trust.

The site has been occupied by four buildings named Colston Hall since the 1860s. In the thirteenth century, the site was occupied by a Carmelite friary, known as Whitefriars. Subsequently, the location held a large Tudor-era mansion known as the Great House, used by Queen Elizabeth I in 1574 on a visit to the city. In 1707, Edward Colston established the Colston Boys' School in this building, which was acquired by the Colston Hall Company in 1861.

Colston Hall opened as a concert venue on 20 September 1867. The architects were the prolific Bristol firm of Foster & Wood, working in the Bristol Byzantine style. It has been designated by English Heritage as a grade II listed building. Most of the building was damaged during a fire on 1 September 1898; the auditorium suffered immense structural damage, and the interior was more or less destroyed. The second hall opened in 1901, and in 1919, the Corporation of Bristol purchased it from the Colston Hall Company. The City Council continues to manage the hall. The second hall was closed for remodelling in 1935. In December 1936, the third hall was opened. This survived the Luftwaffe air raids of the Second World War, but was burned down in 1945 after a discarded cigarette started a fire.

The hall was rebuilt once more, and the fourth reopened in 1951 to mark the Festival of Britain. The first computerised booking system was installed in February 1983, and a £500,000 modernisation programme was conducted at the start of the 1990s, which included extensive rewiring, and various backstage improvements. The installation of removable seating in the front half of the stalls in 2005 improved the hall as a venue for pop concerts, providing space for fans to move around and dance in front of the stage; it also increased the overall capacity of the auditorium. From 2007 to 2009, the Colston Hall underwent extensive refurbishment with the construction of a new foyer alongside the present building, topped by a wind turbine.

In 1982, Kim Wilde performed her first ever UK concert at the Colston Hall. When she returned to Bristol for a concert in December 2013, she tweeted a photograph of the side of the hall (pictured on this page), remembering the "first venue I played in the UK".

Campaigners, many from the city’s Afro-Caribbean community, have called for the hall’s name to be changed because of Edward Colston’s link to the slave trade, much of his wealth having come from that trade. The proposal sparked a heated controversy in the pages of the local press. In April 2017, the charity that runs Colston Hall announced that it would be dropping the name after refurbishment is completed in 2020. On 23 September 2020 it was announced that the venue will now be known as Bristol Beacon. 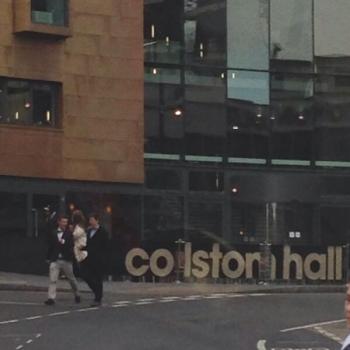