Born as Declan McManus, 25 August 1955, Paddington, London, England, but brought up in Liverpool. The son of singer and bandleader Ross McManus first came to prominence during the UK punk era of 1977. The former computer programmer toured A&R offices giving impromptu performances. While appealing to the new wave market, the sensitive issues he wrote about, combined with the structures he composed them in, indicated a major talent that would survive and outgrow this musical generation. Following a brief tenure in Flip City he was signed to Dave Robinson's pioneering Stiff Records. Costello failed to chart with his early releases, which included the anti-fascist 'Less Than Zero' and the sublime ballad 'Alison'. His Nick Lowe-produced debut 'My aim is true' featured members of the west-coast cult band Clover. His debut hit single 'Watching The Detectives' contained scathing verses about wife-beating over a beautifully simple reggae beat.
His new band, the Attractions, gave Costello a solid base: the combination of Bruce Thomas (born Stockton-on-Tees, Cleveland, England; bass), ex-Chilli Willi And The Red Hot Peppers Pete Thomas (born 9 August 1954, Sheffield, Yorkshire, England; drums) and Steve Nieve (born Steven Nason; keyboards), became an integral part of the Costello sound. The Attractions provided the backing on the strong follow-up, 'This year's model', and further magnificent singles ensued prior to the release of another landmark album, 'Armed Forces'. This vitriolic collection narrowly missed the coveted number 1 position in the UK and reached the Top 10 in the USA. Costello's standing across the Atlantic was seriously dented by his regrettably flippant dismissal of Ray Charles as 'an ignorant, blind nigger', an opinion which he later recanted. 'Oliver's Army', a major hit taken from the album, was a bitter attack on the mercenary soldier, sung over a contrastingly happy-go-lucky tune. By the end of the '70s Costello was firmly established as both performer and songwriter with Linda Ronstadt and Dave Edmunds having success with his compositions. During 1981 Elvis spent time in Nashville recording a country album 'Almost blue' with the legendary producer Billy Sherrill. An honest UK television documentary showed work in progress, with Sherrill unable to be totally complimentary to Costello. George Jones's Good Year For The Roses became the album's major hit, although a superb reading of Patsy Cline's Sweet Dreams was a comparative failure. The following year with seven albums already behind him, the prolific Elvis released another outstanding collection, 'Imperial bedroom', many of the songs are romantic excursions into mistrust and deceit, including 'Man Out Of Time', 'I'm Your Toy'.

The next year Costello as the Imposters released 'Pills And Soap', a similar theme cleverly masking a bellicose attack on Thatcherism. Both 'Punch The Clock' and 'Goodbye Cruel World' maintained the high standards that Costello had already set and astonishingly he had found the time to produce albums by the Specials, Squeeze, the Bluebells and the Pogues (where he met his future wife Cait). During 1984 he played a retarded brother on BBC television in Alan Bleasdale's 'Scully'. The following year he bravely took the stage at Live Aid and in front of millions, he poignantly and unselfishly sang Lennon's 'All You Need Is Love' accompanied by his solo guitar. His version of the Animals' 'Don't Let Me Be Misunderstood' was a minor hit in 1986 and during another punishing year he released two albums; the rock 'n' roll influenced KING OF AMERICA, yet another success with notable production from T-Bone Burnett and guitar contributions from the legendary James Burton and, reunited with the Attractions and producer Nick Lowe, Costello stalled with the less than perfect 'Blood and Chocolate'. Towards the end of the '80s he collaborated with Paul McCartney and co-wrote a number of songs for 'Flowers in the Dirt', and returned after a brief hiatus (by Costello standards) with the excellent 'Spike' in 1989. During 1990 he wrote and sang with Roger McGuinn for his 1991 comeback 'Back to Rio'. During that year a heavily bearded and long-haired Elvis co-wrote the soundtrack to the highly controversial television series 'GBH', (written by Bleasdale) and delivered another success, 'Mighty Like a Rose'. With lyrics as sharp as any of his previous work, this introspective and reflective album had Costello denying he was ever cynical - merely realistic. His perplexing collaboration with the Brodsky Quartet in 1993 was a brave yet commercially unsuccessful outing.
Kim Wilde has mentioned Costello as one of her favourite male recording artists in 1986. 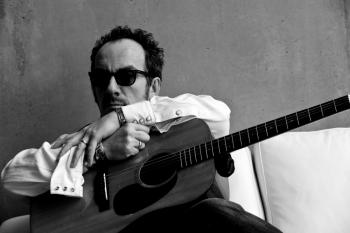