The Dutch broadcasting company Veronica started their TV programming in the second half of the 1970's on a public television channel. They were entitled to a few hours of television every week. They started the programme Countdown. Initially, Countdown was broadcasting live concerts by artists such as AC/DC and the Police, but in 1983 the programme was remodelled. Host Erik de Zwart presented a chartshow not unlike its main competitor Toppop.
In 1984 De Zwart was replaced by newcomer Adam Curry. Born in America, he presented the show with a heavy accent. He was responsible for a period of immense popularity. Within a few years, Countdown was the most popular music show in the Netherlands, and it was soon franchised into Europe: first on Europa TV, then on Sky Channel.
Adam Curry quit the show in 1987, when he was offered a contract by MTV in America. Presenters Simone Walraven, Wessel van Diepen and Jasper Faber failed to continue the success story, and by 1994, Countdown was finally cancelled.

During its run, Kim Wilde visited the Countdown studios numerous times. She performed all of her biggest hits and was repeatedly interviewed in the show. 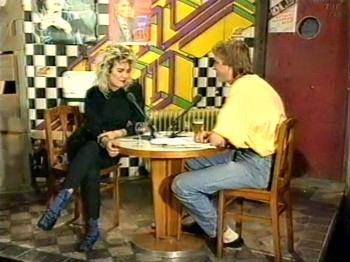 Kim being interviewed by Adam Curry on Europa Countdown, 8 July 1986