On her 2013 album Wilde Winter Songbook Kim covered the Christmas songs Winter Wonderland, Have Yourself a Merry Little Christmas, Winter Song, White Winter Hymnal and Let It Snow. On the expanded version of that album, released two years later, she also covered Keeping the Dream Alive and Last Christmas.

Another cover Kim recorded in recent years was Love Will Keep Us Together.

During live performances, Kim has performed covers of 48 Crash, A Little Respect, All the Things She Said, Big Hunk o' Love, Big Love, Ça Plane Pour Moi, Chasing Cars, Dancing in the Street, Enjoy the Silence, Enter Sandman, God Only Knows, I Drove All Night, I Got You Babe, I Wish It Could Be Christmas Every Day, I'll Stand By You, It's My Life, Livin' on a Prayer, Merry Christmas Everybody, Mind of a Toy, No Way Back, Nothing Else Matters, Oh Lori, Première Rencontre, Real Wild Child, Shake, Rattle and Roll, Silent Night, Sleeping Satellite, Solid Gold Easy Action, Thank You For the Music, The Name of the Game, Tracks of my Tears, Try, When the Boy's Happy (The Girl's Happy Too) and Wonderful World.

On television, she's performed cover versions of Belle-Ile-en-Mer Marie-Galante, Bye Bye love, Harvest for the World, Nobody Does It Better, One Night with You, Que Sera Sera, Santa Claus is Coming To Town, Signed, Sealed, Delivered, Something Stupid, Teddy Bear, They Can't Take That Away From Me, Together Forever, Treat Me nice, We Wish You a Merry Christmas and You Have To Learn To Live Alone.

Cover versions performed on the radio include Bi-ba-Butzemann, Knees Up Mother Brown, Move It and Teenager in Love.

Finally, a cover version of the song Freight Train appeared on a cassette magazine in 1981.

The following Kim Wilde songs were covered by other artists: Another Step (Closer to You), Cambodia, Chequered Love, Child Come Away, Dancing in the Dark, Four Letter Word, Hey Mister Heartache, Hope, Kids in America, Love Blonde, Million Miles Away, Never Trust a Stranger, Say You Really Want Me, The Second Time, Stay Awhile, This I Swear, Turn It On, View From a Bridge, Water on Glass, You Came and You Keep Me Hangin' On. 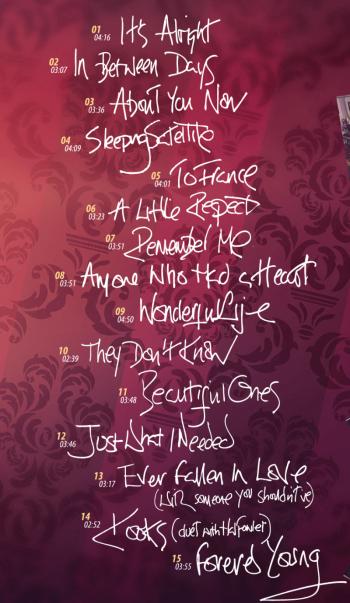