Born Crain was born as Born Meirlaen on July 15, 1980 in Gent, Belgium. He first came to prominence during the 2004 edition of the Belgian version of the 'Idols' TV programme. He finished fifth in the contest. A few months later her signed a record contract with ARS Entertainment.

He released his debut single in Belgium in 2006: 'Fools rush in'. The song ended up on number 10 in the charts. The follow-up singles 'Good times' and 'Don't ever go' were equally successful. In October 2006 the debut album 'Fools rush in' was released. A fourth single followed in 2007: 'Walking In The Sun'. In May 2007 his debut album was released in Japan. It was a big success in that country as well.

The first single from his second album, to be released in September 2008, was released in April 2008. Entitled '4 letter word', it was not a cover of Kim Wilde's song of the same name. Still, on July 3, 2008, the two performed two songs live together in Brussels on the occasion of the Wilkinson American Movie Day. They sang two songs together: If I Can't Have You and I Drove All Night. The two had never met before and rehearsed the songs in the afternoon during soundcheck. Born also performed live, opening for Kim Wilde on the night.

In 2012, Born Crain released the album 'Born in the USA', an album of songs about America. The album included a cover version of Kim's Kids in America. A year later, his next album 'Identity' was released, including the song Superstars, a duet with Kim, which was also the album's first single. 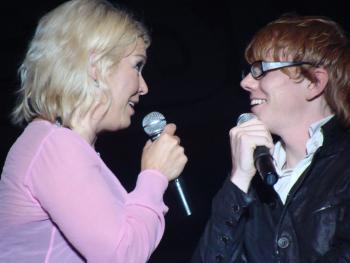