Created by Kim Wilde and Richard Lucas for the Chelsea Flower Show 2005, the Cumbrian Fellside Garden was one of ten gardens competing in the Courtyard Gardens category. They won a gold medal and 'best in show' for this category, as well as the BBC RHS People's Award for it. The garden was exhibited for one week, between May 23 and May 28, 2005.

The garden was carved from a gently sloping plot in the Lake District. A constant trickle of water was guided gently through the garden by a rill, providing a simple and relaxing feature. The rear of the garden was mostly wild. Wild flowers grow in the long grass and in crevices within the dry stone walls. The front of the garden was romantically planted with Aquilegia, Geranium, Linaria and Astrantia. Natural Cumbrian slates were put to use, both as flagstones and to retain the wildflower bank while a narrow pathway leads out of the garden over a stile and on to the fell side.
A living willow arbour provided a place to rest among the flowers. A contemporary slate sculpture, opposite, creates a focal point. Cumbrian slate sphere provided a balance, and were echoed by the planting of clipped box balls.
The garden was dominated by a hawthorn three, whilst a native elder provided structure, height and maturity. All materials used in the garden such as slate, timber and willow were produced from sustainable sources, or were reclaimed materials.

Elsewhere on this website you can find a digital representation of the Cumbrian Fellside Garden. 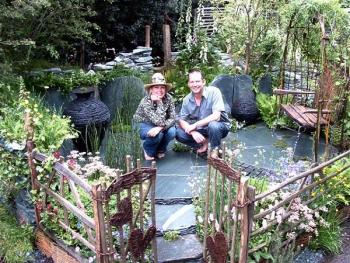 Kim and Richard Lucas in their Cumbrian Fellside Garden, May 2005