This late '80s UK pop group graced the covers of all the teen-pop magazines. The various group members all had showbusiness/theatrical backgrounds. The line-up comprised: Ben Volpeliere-Pierrot (born 19 May 1964, London, England), Julian Godfrey Brookhouse (born 13 May 1963, London, England), Nicholas Bernard Throp (born 25 October 1964, London, England) and Migi/Michael Drummond (born Miguel John Drummond, 27 January 1964, Middlesex, England). Volpeliere-Pierrot's father was a celebrity photographer and his mother a model. Ben's surname was a double-barrelled convolution of their surnames. His childhood was dotted with visits from various Beatles, Rolling Stones and other faces of the '60s who held court at his parents' home.
Volpeliere-Pierrot first played alongside the other members in the punk-influenced Twilight Children. Drummond was the son of a film and video maker and also brushed with the stars when his father's company made videos for bands such as the Police. After discovering punk he took up drumming, and met Throp at art school before an invitation to join the Twilight Children. In mid-1984 Volpeliere-Pierrot was dating Drummond's sister and the boys invited him to sing in their band, kicking out the old vocalist in the process. Later that same year Toby Anderson also joined the group as keyboardist and songwriter. A demo of a song called "Curiosity killed the cat" was heard by businessman Peter Rosengard who became their manager and they changed their name to that of the song. A debut gig was held at the Embassy Club in December 1984 at which point there were still numerous extra musicians and singers on stage. They shed the excess baggage although Anderson remained the 'fifth' Cat until late 1986.

Signed to Phonogram in 1985, they started recording towards the end of the year. Their album was held up for almost a year after original producers Sly Dunbar and Robbie Shakespeare were dropped in favour of Stewart Levine. 'Misfit' followed in July but flopped. Another face from the '60s, Andy Warhol, met the band at a London art exhibition and he championed them, even appearing in a music video for 'Misfit'. His involvement, though useful, was cut short when he died in 1987. Several television appearances helped to push the second single 'Down to Earth', which entered the charts in December 1986 reaching the Top 10 in the New Year.

A series of further hits followed, including a re-issued 'Misfit'. However, after 'Free' in September 1987 they underwent a quiet period, although they did appear in the music video for Rockin' Around the Christmas Tree alongside Kim Wilde and Mel Smith.

The band returned in 1989 as Curiosity with the single 'Name And Number'. The 1992 single 'Hang on in There Baby' was their last big moment, reaching number 3 in the chart. 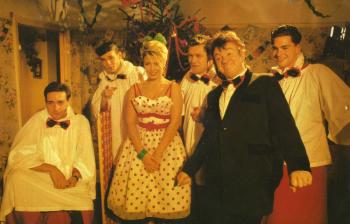