Born on September 3, 1964, Adam Curry lived in Amstelveen (Netherlands) between 1972 and 1987. After working for various pirate radio stations using the pseudonym John Holden, he got a break in broadcasting as the host of the Dutch weekly pop music show Countdown in 1984. In this capacity he met Kim Wilde on a few occasions; interviewing her in early 1985 and in the summer of 1986. They recorded an hour long Countdown special for the European satellite channel Europa TV in 1986. Curry also presented several radio programmes for Dutch broadcaster Veronica.

In 1987, Curry became a VJ for MTV. Besides making spot appearances between music videos, he was also host of the programs Headbangers Ball and MTV Top 20 Video Countdown in which he interviewed stars like Michael Jackson and Paul McCartney. While working for MTV, he also did radio work, including drive-time host for the New York City radio station WHTZ, and host of the national program HitLine USA. Between 1989 and 2009 he was married to Dutch singer Patricia Paay. They have a daughter Christina, who become a wellknown socialite in the Netherlands when she grew up.

While in the USA, Curry registered the then-unclaimed domain name "mtv.com" in 1993 with the idea of being MTV's unofficial new voice on the Internet. Although this move was sanctioned by his superiors at MTV Networks at the time, when Curry left to start his own web-portal design and hosting company, OnRamp Inc, MTV subsequently sued him for the domain name. OnRamp eventually grew to 4000 employees and was sold to Think New Ideas Inc., another company that he co-founded, becoming Chief Technology Officer of Think. It subsequently grew to employ over 7400 people and with offices in seven countries, and was absorbed into Answerthink Inc., in a later merger.

After selling his business in the U.S., Curry and his family moved to the Netherlands in 1999, where Curry hosted a morning talk/music show for Radio Veronica. He also landed various television assignments and his family briefly starred in the reality show Adam's Family.

In 2000 he and business partner Simon Cavendish, a participant in his earlier ventures, founded the RotorJet company to offer helicopter services. The company filed for bankruptcy in 2005. In the subsequent dispute, Cavendish seized the assets of the company, and in April 2005, Curry was ordered by a Dutch court to repay approximately US$3 million that he had withdrawn from RotorJet.

Curry founded PodShow, now Mevio, with his business partner Ron Bloom, in January 2005. PodShow is a podcast promotions and advertising company that encompasses the Podshow Podcast Network, the Podcast Delivery Network, and the Podsafe Music Network. Some of Podshow's top podcasts are Curry's own Daily Source Code, The Dawn and Drew Show, and GeekBrief.TV. From June 2005 to May 2007, Curry hosted a weekday evening show on Sirius Satellite Radio called 'Adam Curry's PodShow'. Curry is widely credited for popularizing the podcast medium.

In July 2012, Curry married Dutch model and photographer Micky Hoogendijk. On January 29, 2015, Curry announced that he and Hoogendijk had separated. Since May 2015 he has been in a relationship with Tina Snider, and they announced their engagement to be married in September 2018. 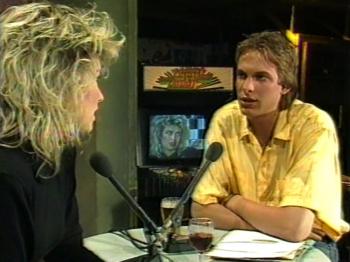