His music really excites me. The first time I saw him was in France when we were both doing a TV show with lots of other acts. I watched him doing a couple of songs and the first thing that attracted me was his cute little dance and his cute little jeans and I thought he was as horny as hell. I stood by the side of the stage thinking "My God, this guy's so cute" and I began filming him with my little movie camera and I found I was zooming further and further in. Subsequently I've constantly listened to his music - I've bought seven-inches, 12-inches, compact discs - everything he's got out - and I think he's so under-rated. I bumped into Richard Branson last week and bent his ear about why his record company [Virgin] isn't doing enough to promote Etienne over here. (1) 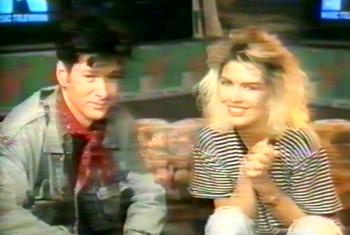