Born as Doris Von Kappelhoff, April 3, 1924 in Cincinnati, Ohio, USA. One of popular music's premier post-war vocalists and biggest names, Kappelhoff originally trained as a dancer, before turning to singing at the age of 16. After changing her surname to Day, she became the featured singer with the Bob Crosby Band. A similarly successful period with the Les Brown Band saw her record her single for Columbia, 'Sentimental Journey', which sold more than a million copies. Already an accomplished businesswoman, it was rumoured that she held a substantial shareholding in her record company. After securing the female lead in the 1948 movie "Romance On The High Sea" she enjoyed a stupendous movie career. Her striking looks, crystal clear singing voice and willingness to play tomboy heroines, as well as romantic figures, brought her a huge following. In common with other female singers of the period, she was occasionally teamed with the stars of the day and enjoyed collaborative hits with Frankie Laine ('Sugarbush') and Johnnie Ray ('Let's Walk That A-Way'). She appeared in nearly 40 movies over two decades. These films featured some of her most well known hits.
Day enjoyed a further UK chart topper with the romantically uplifting Que sera sera. After a gap of nearly six years, she returned to the charts with the sexually inviting movie theme 'Move Over Darling', co-written by her producer son Terry Melcher. Her Hollywood career ended in the late '60s and thereafter she was known for her reclusiveness. After more than 20 years away from the public's gaze, she emerged into the limelight in 1993 for a charity screening of one of her movies, 'Calamity Jane' in her home town of Carmel, California. History has made her an icon, whose fresh-faced looks, sensual innocence and strikingly pure vocal style effectively summed up an era of American music.

She passed away on 13 May 2019 after contracting pneumonia. She was survived by one grandson.

Kim Wilde dressed up and sang as Doris Day for the program Celebrity Stars in Their Eyes. 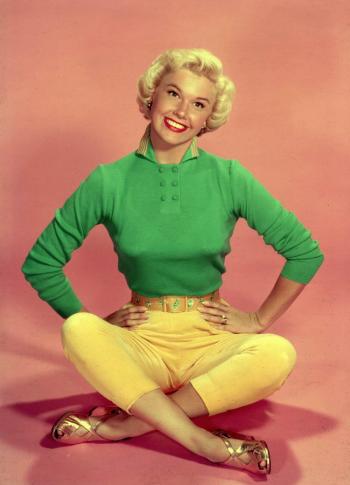