The Digital Compact Cassette (DCC) is a magnetic tape sound recording format introduced by Philips and Matsushita in late 1992 and marketed as the successor to the standard analogue Compact Cassette. It was also a direct competitor to Sony's MiniDisc (MD) but neither format toppled the then popular analogue cassette despite their technical superiority.

DCC was envisaged as a cheaper alternative to DAT (the format established in recording studios) - which had by 1992 also failed to sell in large quantities. DCC shared a similar form factor to analog cassettes, and DCC recorders could play back either type of cassette. This backward compatibility allowed users to adopt digital recording without rendering their existing tape collections obsolete.

Pre-recorded DCC's were also sold for a short time. Only two Kim Wilde DCC's were ever released: Love Is and The Singles Collection 1981-1993. 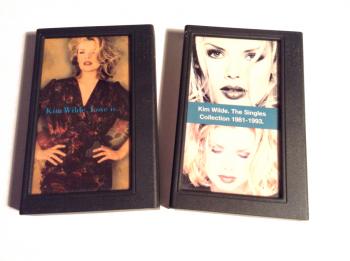