From the first day Paul picked up a bass at age 12, friends and family noticed that the lefty had his own approach to the instrument –literally upside down and backwards – (left handed bass, strung right handed). He eventually went on to become one of the best players in his local New York and New Jersey scene and eventually to international success with some of the worlds finest artists.
Paul is regularly touring with Nena, as he has been a member of the band since 2001. While working with Nena he has received two platinum and two gold records including those that he was awarded as a one of the co-writers of Nena’s 'Willst Du Mit Mir Gehen' record.
Paul has also performed and recorded with various artists including, Billy Joel, Paul Simon, Carly Simon, Lauryn Hill, M-People, Steve Gadd, Toots Thielemans, Ace Frehley, and Enrique Iglesias, to name a few.
He played bass on Kim Wilde's track You Keep Me Hangin' On (2006). 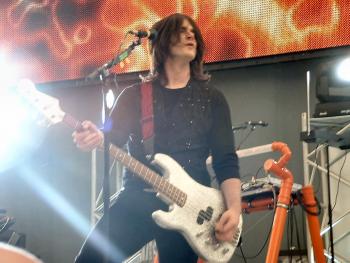