Born in London on June 4, 1987, Emily Dolan Davies was raised by parents who encouraged her to play instruments, but none of them really 'clicked' until she went to a drum club at age 11. She started taking private lessons and played with every band and musician possible inside of school. After her A-levels she started playing drums with different bands.

Her first professional touring experience happened when she was 20 years old, with The Hours. She spent 2 years touring around the world. Highlights of those 2 years include playing with Bono of U2, recording an album with The Hours (See The Light), produced by Flood (U2, Nine Inch Nails) collaborating with Damien Hirst on the artwork and shooting a video with Tony Kaye.

In 2010 she joined Bryan Ferry to record on his album Olympia which was released October 2010 on Virgin Records, and to join his corporate band for 3 years. The next year she joined trip-hop artist Tricky on his his ‘Mixed Race’ world tour for a year followed by a UK tour and festival run with Cher Lloyd in 2012. 2013 was spent touring with XFactor artist Janet Devlin around the UK promoting her debut album Hide and Seek as well as with Jazz artist Emilia Mitiku promoting her album I Belong To You. 2014 brought her gigs playing with Becky Hill of ‘The Voice’ fame and she toured the US and Asia with Thompson Twins’ Tom Bailey, as well as recording The Darkness’ 4th studio album, ‘Last Of Our Kind‘, which she toured prior to its release in June 2015.

Not depending solely on touring commitments, she decided to set up an online drumming studio. Via her own website emilydrums.com she provides drum tracks for whoever requires them.

In 2018 she joined Kim Wilde's band as one of two drummers, alongside Jonathan Atkinson, during the Here Come The Aliens Tour. Recordings of this tour appear on the album Aliens Live. 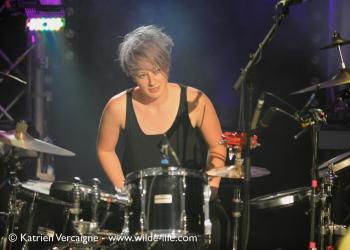