Dollar was one of the most successful pop duos in the UK. They sold over 10 million record in a career that spanned 10 years. David Van Day and Thereza Bazar met in the group Guys 'n' Dolls during the 1970's and fell in love. They left the group after a few years and formed Dollar in 1978. They almost immediately scored a hit with 'Shooting star', peaking at no. 14 in the UK charts. Their first album of the same name was released in 1979. After scoring another hits with the Beatles track 'I wanna hold your hand', Bazar and Van Day got engaged and recorded the second album, 'The Paris Collection'. Their love affair ended in june 1981, but they still worked together as Dollar. Hiring Trevor Horn for their third album, 'The Dollar Album', they were more successful than before with hits like 'Hand held in black and white', 'Mirror mirro' and 'Give me back my heart'. After unsuccessful solo efforts in 1985, they recorded together once more. In 1987 Dollar obtained a top ten hit with a cover the song 'Oh l'Amour', only two years after the release of the original version by Erasure. Their last single 'It's nature's way' (1988) failed to make much of an impact, and they split up. Van Day tried to replace Bazar with other female vocalists, but finally called it a day. He worked his way into an incarnation of the Eurovision Song Contest winners Bucks Fizz and subsequently hijacked the name of this group, leading to countless court cases between him and original band members of this group.

In December 2002, Dollar reformed for the Here & Now Christmas Party tour, to mixed reviews. In this tour, they were one of the acts to support headliners Human League and Kim Wilde. In 2003, they participated in ITV1's music TV show 'Reborn in the USA' for a short time. After being voted off by the audience in the first week they responded with bitter comments about fellow contesting artists.

In July 2008, Dollar reformed again to take part in a UK reality television programme entitled 'Pop Goes the Band', in which a number of former pop stars were remodelled and restyled to try to recapture their former glory. The programme aired on Living TV on 23 February 2009.

On 15 February 2010, Cherry Pop re-issued remastered and expanded editions of 'The Dollar Album' and 'The Paris Collection' for the first time on CD. This was followed in November 2019 by a comprehensive box set featuring all their recorded output plus new remixes. 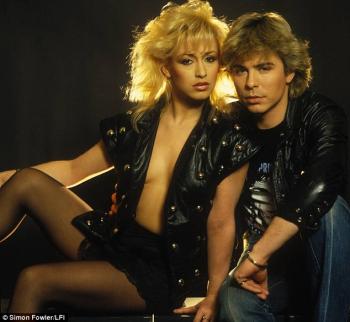