Born as Sheena Shirley Orr on April 27, 1959, Bellshill, Scotland. She began performing while studying drama in Glasgow and was signed to EMI Records in 1979. A television film about the creation of her chic image helped Modern Girl into the UK charts. This was followed by 'Nine to Five' (a.k.a. 'Morning Train') which sold over a million copies. Extraordinary success followed in America where she spent most of her time.
Easton was given the theme song to the 1981 James Bond film, 'For Your Eyes Only'. Further hits followed from her second album, including 'When He Shines' and the title track, 'You Could Have Been With Me'. In 1983, Easton, who had now emigrated to California, joined the contemporary trend towards celebrity duets, recording 'We've Got Tonight' with Kenny Rogers. 'Telephone (Long Distance Love Affair)' was in a funkier dance mode and her career took a controversial turn in 1984 when moralists attacked her on the sexual implications of 'Sugar Walls', a song written by Prince which became one of her biggest hits. Easton also sang on Prince's 1987 single, 'U Got the Look'.

In 1988 she switched labels to MCA Records, releasing 'The Lover in Me'. The album's list of producers read like a Who's Who of contemporary soul music, with L.A. and Babyface, Prince, Jellybean and Angela Winbush among the credits. Her album, 'What Comes Naturally' was aimed at the dance market and successfully so.

Her following albums, 'No Strings';  (1993) and 'My Cherie' (1995) were less dancable, containing easy listening songs backed by full orchestras. At the turn of the century, Easton signed a contract with MCA Japan and released two albums: 'Freedom' (1997) and 'Home' (1999). Easton adopted a boy (Jake) and girl (Skylar) between 1995 and 1996. Motherhood led her to curtail her appearances and focus on casino gigs, corporate shows and theatrical work.

In 2000 she signed an album contract with Universal and attempted a comeback with the album 'Fabulous', featuring several disco covers. This was to be Easton's last album release to date. The album was released throughout Europe, Japan, Australia, and Argentina but not in the US.

Sheena Easton's career is comparable to Kim's, both having worked for EMI and MCA. They have also been coupled on a compilation CD released in Australia, called The Best of Kim Wilde and Sheena Easton. 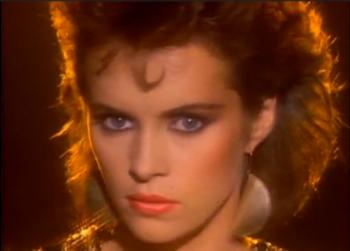