Born on April 10, 1979, Sophie Ellis-Bextor is the daughter of Janet Ellis, who was a presenter on the BBC TV programmes Blue Peter and Jigsaw, and film producer and director Robin Bextor. She attended St. Stephen's School and later Godolphin and Latymer School in Hammersmith. Among her earliest public performances were with the W11 Opera children's opera from the age of thirteen.

She began her professional musical career in 1996, singing lead vocals in indie band Theaudience. The band released four singles, including the UK Top 40 hits 'I know enough (I don't get enough)' and 'A pessimist is never disappointed', and one self-titled album (1999). The band split in 1999 after demos for a planned second album were rejected by their label Mercury Records, who then dropped the band.

In 2000, Ellis-Bextor collaborated with Italian DJ Spiller, adding vocals to his then-instrumental club track 'Groovejet'. The track became in instant hit all over Europe, including number 1 in the UK, Ireland, Switzerland and also in Australia and New Zealand. In 2001, Ellis-Bextor released her debut album, Read My Lips. It reached number two on the UK charts and spawned four top-twenty hit singles. The record experienced international success, selling more than 2 million copies worldwide.

Ellis-Bextor's second album, 'Shoot from the hip', was released in October 2003. The album reached number 19 in the UK and produced two top ten singles. 'Trip the Light Fantastic', her third album, was released in May 2007 and reached number seven in the UK. The album produced three singles. Her fourth studio album, 'Make a scene', was released in April 2011 (reaching number 33 in the UK), with its lead single 'Bittersweet' peaking at number 25 in the UK. In 2014, Ellis-Bextor released her fifth studio album, 'Wanderlust' which became her highest charting album since 'Read my lips', peaking at number 4 in the UK. Her next effort, the Latin America inspired Familia earned critical acclaim in 2016 and reached number 12 in the UK albums chart.

In 2019, the compilation album 'The song diaries' - featuring orchestral re-recordings of her greatest hits - was equally successful, reaching number 14 in the UK albums chart.

In March 2020, during the corona pandemic which sweeped over Europe, Sophie started a Friday night disco streamed live from her living room. During the second edition, on April 3, she performed a cover version of Kids in America. 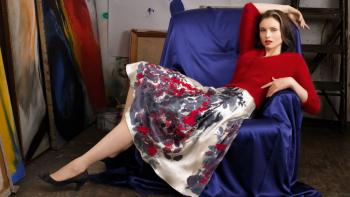